THEC64Mini (or THEC64 MINI) is an updated version of the Commodore 64 home computer, manufactured by Retro Games Ltd. and distributed by Koch Media. It is based on an ARM CPU A20 SoC and Linux operating system running the VICE emulator. It connects via HDMI to any ordinary home TV. It comes supplied with 64 classic C64 games, such as Uridium, Paradroid, Hawkeye, Nebulus, and Monty Mole. Players can save their game states scores to permanent storage if using the included games; up to four states exist per game. It is also possible to save game states for software loaded via a USB pen drive, with the saved information written to the pen drive.

HDMI and Power-In on back side

Right side: Two USB plugs and the power switch. 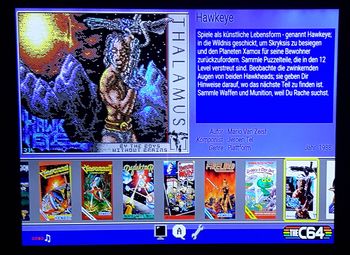 The following 64 C64 classical games was developed by the publishers Epyx, Gremlin Graphics, Hewson, Thalamus and The Bitmap Brothers and contained in THEC64Mini:[1]

You need a USB stick, which is in FAT32 formated and contains a D64 image, which has the name THEC64-drive8.d64. After that choose in the THEC64 Mini menu BASIC and load with LOAD "NAME",8,1 your program and start it by writting RUN. Also you can reload other programs, if this programs inside the same diskside.

As of version 1.1.0 of the firmware, loading games off of a USB stick is as easy as saving the supported files (.d64, .d81, .prg, .crt, .tap) on either the root directory of the device, or within a file folder. Then, using the new File Loader and joystick, navigate to where the file is stored and launch it by pressing the fire button on the joystick.