There is something fishy on the planet NEBULUS. Somebody has started to build huge towers in the sea without having a building permission from the responsible authority.

You are abruptly shaken up from your well-deserved afternoon nap in your office at Destructo Inc.. The phone rings relentlessly. At the other end is the boss and croacks something about a small destruction assignment on which he wants to set you. Bad-tempered and drowsy are you just about to throw the receiver into the waste bin, but suddenly you strain your ears. Did your boss actually say something about a brand new Mk7-Mini-Sub, that for this purpose... and as he also mentioned something about a "salary increase", you dash lickety-split out of the office and let the phone dangle, while the boss passes on to explain the extreme risk of this mission.

You have to climb up eight towers, so you can make them collapse. There are lifts, instable floor boards and destructible as well as indestructible enemies. The pawn always stays in the middle of the screen, when moving the tower turns further correspondingly. Between the towers there is a bonus level, in which fishes needs to be bubbled (shot) and collected.

Your submarine takes you to the different towers. Within the given time you need to make it to climb to the top. On the way, you need to channel your way over all kinds of mouldings, edges, tunnels and lifts. Some structures dissolve when stepping on them, others are so slippery that you slide to the left or right.

You can shoot the flickering blocks and the jumping balls, but the silver, rolling balls can only be stopped in their path for a few seconds. All the other creatures are indestructible. When colliding with them, you lose your grip on the moulding and land a few storeys deeper – if you are lucky! If not, you fall into the water and lose a life.

Entering the last door at the very top of the tower activates the destruction machine. You get bonus points for the time that is still left and for technical abilities. The tower begins to totter and crumbles into a thousand pieces.

After destroying the tower you climb again into your submarine which takes you to the next tower. During the journey you can earn additional points by catching fish. Shoot bubbles to numb the fishes and then collect them by driving over them.

You play with joystick in port2. Right/left moves the pawn correspondingly, up is used to enter a tunnel and fire releases a shot (while standing) or a jump (when moving). A lift is operated with up/down.

Runpoints are points that can be reached within a tower. They are composed of the two following components:

Bonus points at the end of the level[edit | edit source]

For each shot and collected fish the player gets 50-75 points. In each underwater sequence there are exactly 30 fishes.

If Nebulus is played to the end, extra lives are not refunded. Therefore it makes sense to sacrifice remaining extra lives, in order to reach more points. The player gets an extra life every 5.000 points. As there are less than 5.000 runpoints in every tower, "strategical dying" can only repeated restrictedly (and not endlessly)!

Shakermaker303: "The game was presented at that time in a computer show and then I was certain: "I want to have it". Nice sound effects, cool screen scrolling (I like the underwater bonus level very much) and all around a nice idea. Also, the title figure looks cute :-)."

Clones are available for all established PC platforms, e.g. as free software basing on SDL, but also for Palm and iPhone.

Since 13.06.2008 the game is available as download for the Nintendo Wii Virtual Console. 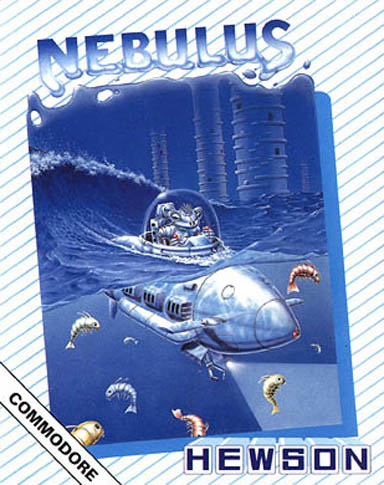 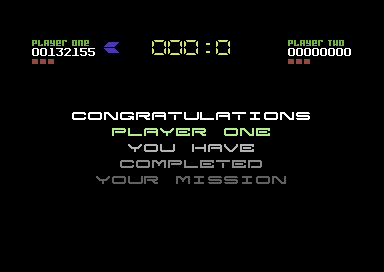