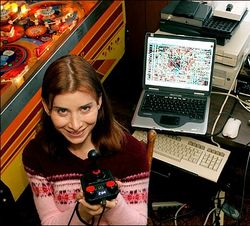 Jeri Ellsworth, designer of the C64DTV

The C64DTV (Commodore 64 Direct-to-TV) is a single-chip implementation of the Commodore 64 computer with 30 built-in games and is housed in a joystick case. The C64DTV was designed by Jeri Ellsworth.

The C64DTV concept followed on from the C-One project also designed by Ellsworth. Tulip Computers NV (which had acquired the Commodore brand name in 1997) wanted to market a smaller version of the C-One and licensed the rights to Ironstone Partners, which cooperated with DC Studios, Mammoth Toys, and The Toy:Lobster Company in the development and marketing of the unit.[1] Assisting Ellsworth with the C64DTV were Jason Compton, Adrian Gonzalez, Robin Harbron, Per Olofsson, Mark Seelye, and Oliver VieBrooks. By March 2005 Tulip Computers NV sold the rights to Yeahronimo Media Ventures.

There are a number of versions of the C64DTV as detailed in Table 1.

The official games for the unit are mostly a mix of Epyx and Hewson Consultants Ltd. C64 games. Games unique to the NTSC or PAL versions are indicated in Table 2.

The C64DTV mainboard has exposed solder points for floppy-drive and keyboard ports, enabling hardware modifications (modding) such as:

The C64DTV contains flash memory and is available as device 1 (although no software is included for access). Nevertheless, a number of homebrew tools exist that can compile programs into DTV-compatible flash images and load them to the flash memory. In their original form, many games were not suitable for the C64DTV due to the requirement for a keyboard or extra joystick. However, many more games have now been altered in order to run on the C64DTV. Also available are custom game compilations, alternative boot menus, and data transfer facilities. Programs such as DTVtrans enable data transfer between a PC and the C64DTV RAM via the PC parallel/USB port and the C64DTV joystick port. It should be noted that flash devices used in the C64DTV only enable a very limited number of write accesses.