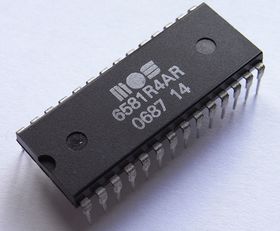 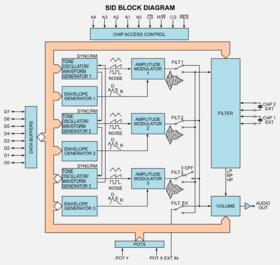 SID (short for Sound Interface Device) is the name of the sound chip used in the VC 10, C64 and C128. The SID was developed by Bob Yannes, an employee of the firm MOS Technology. Bob (Robert) Yannes knows, beside technical know-how, a lot of music. His intention was to implement a real subtractive synthesis chip, totally different from all other home computer sound devices of its time. The chip's distinctive sound is easily recognized and was clearly ahead the competition. The chip combines analogue and digital circuitry, that cannot be emulated with 100% fidelity even today. Emulated sounds do come very close to the original and a layperson is not likely to notice the difference. The SID sound is well known among retro gamers.

A collection of SID music is available that includes nearly every song ever written for the chip and is known as the High Voltage SID Collection. This collection can be heard on modern computers using utilities such as SIDPLAY.

Properties of the SID[edit | edit source]

A small BASIC program for the C64 demonstrates some sound effects. Only the first voice of the SID is used for this. The program can only be interrupted with the RUN/STOP  key.

Because of the many controls of the SID, the SID's base address should be put into a variable, i.e. S = 54272. Before the waveform (here: register 4) is used, the envelope (ADSR; here: register 5 and 6) should be set. The volume (register 24) can only be set for all voices at once.

Bob Yannes later went on to form the well known synthesizer company Ensoniq. Their first synthesizer, the ESQ-1 is, according to Bob, the synthesizer he wanted the SID chip to be. Due to a rough time table, a lot of features had to be dropped and the design was finished just in time. Many characteristics of the SID sound are bugs, technically seen, but depending on the point of the listener they can be seen as features or were used to hack the chip. For example the volume register design flaw in the original 6581 chip was used to play back samples. Every time the volume register value was altered, an audible click could be heard. By changing the first 4 bits of the register at $D418 fast enough, samples can be played back with rates up to some kHz (depends on the code and what else uses rastertime) with 4 bit resolution. In the later 8580 model this "bug" was fixed and samples were inaudible, but it is possible to revert this by soldering a 470kΩ resistor or, if you want to be able to adjust the level, a 1MΩ pot in series between EXT IN and GND. Even better sample playback can be achieved by altering the pulse width modulation register, which can hold an eight bit value.