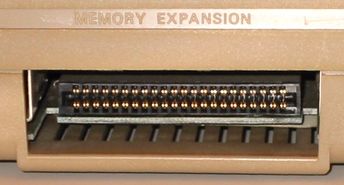 The Expansion Port of the C64

The Expansion Port or Memory Expansion Port on older models, also called Module or Cartridge Port. This port is a rectangular opening at the back of the C64 case and is intended for expansions of the system. Basically it has similar function to ISA or PCI ports in a PC. Since many important signals of the C64 are led to the connector, this results in a wide range of applications. From just connecting a simple reset button, a modem or an EPROM programming device or maybe a SuperCPU there are almost all imaginable expansions possible. The expansion port is mainly used for plugging in cartridges which are usually utility cartridges such as Action Replay 6, The Final Cartridge 3 etc. but also games, other software and RAMexpansion.

Contrary to the user port there are no freely programmable lines on the expansion port, i.e. expansion port modules need to "listen" permanently to the data and address bus of the CPU MOS 6510 and affect the system with a conform timing. Therefore the expansion port is not as suitable for simple projects. On the positive side the connector can be made directly on the PCB, no unusual connector is needed.

Pin assignment of (Memory) Expansion Port on the computer