First, the player can choose between different options. Single races or cups can be chosen as well as the number of players (one or two), the number of rounds and the difficulty grade. Pitstop 2 is played in the splitscreen mode. If only one player is set, the computer controls the vehicle in the lower half of the screen.

Pitstop 2 offers altogether 6 different tracks which are Hockenheim (Germany), Sebring (USA), Brands Hatch (England), Watkins Glen (USA), Rouen (France) and Vallelunga (Italy). There is no roadside structure at the track but in return, the track is zoomed in fluenty. The graphical display of the racers is also successful. The vehicles can be well controlled along the track. Concerning the tracks: Except for horizontal graphics and the course of the track nothing changes. The runway is always flat, black and the kerbs are always red-white and the grass is green. There is no huge graphical diversity.

But concerning the game itself there is a lot of action! The two vehicles are completely identical concerning the performance. So exciting races are inevitable. The other cars that appear during the race and need to be overtaken are mere dummies. An actually drastic cut which does not weigh much in this game, as the direct duel against the opponent (human or computer) is important. Times of altogether 8 other drivers are calculated which finally form the end result (compared to the own time).

The already pathbreaking features for 1984 were on the one hand the fuel consumption and what was even more: the tyre abrasion. The more often the car would bump somewhere, the more were the tyres strained - and this for each tyre individually. The state of each tyre is shown by a colour marking on the tread area. For a new tyre the colour is at first black and then changes to brighter colours with more abrasion. If the marking is white, another touch is enough for the premature out. Of course the opponent made of flesh and blood likes to see this happen to you as much as vice versa. Therefore provoked bumpings can happen fast in a duel between two humans, to throw the opponent out of the race. Because if a tyre is burst, then the race is over.

Damaged tyres can be changed in the pit. The fun is: you have to do the work yourself. The player controls a mechanican that lugs the single tyres to and frow and also changes them. The whole thing happens far from fast, but it is an enriching feature. The tyre sneaker is cult for a long time! Races are not seldom decided in the pit.

The refuelling must also take place in the pit. Here you need to mind the fuel display, as an overfuelling of the tank leads to an empty tank and you have to start anew.

Pathbreaking for 1984 was surely the splitscreen mode, this was not known at that time. Otherwise the graphics is rather simple but very clear. There is nothing to say against that. Concerning the sound Pitstop 2 is unfortunately poorly equipped. You can hear relatively loud motor sounds, but they are not not even close to authentical.

The controls are done comfortably with the joystick and does not need much explanation, it is kept very simple.

- to steer the car left/right

- to speed up heavily

After the end of a race a new race is started with the fire button. During the race the game can be restartet by pressing the RESTORE  key.

The pit entrance appears on the left side of the track. To enter the pit steer your car into the entrance.

To refuel lead the crew member with the gas pump nozzle to the side of the car to the opening of the tank. Watch the fuel display - if the tank overflows you have to repeat the process.

To change the tyres move another crew member to the damaged tyres. After taking the tyre off (goes automatically, if he is moved at the right height to the tyre) walk to the correct tyre stack. At the rear is the stack with the rear tyres and at the front next to your car is the stack with the front tyres. Take a new tyre and fit it - the right position of the crew member is important during this work. You can refuel at the same time while you change the tyres.

To leave the pit, move the cursor to the driver and press the fire button. Make sure that all crew members have moved away from the car!

The solution to the game is simple: who drives fastest, is first over the finish line ... but it is not that simple, though, as you must not waste too much time especially in the pit. So a small tip: go easy on the tyres, drive fuel efficiently and be fast in the pit!

Guybrush: "Pitstop 2 is despite its age (1984!) and simple buildup still a game that you should take a look at. It is recommended, however, to convince a second player of a duel, because the game is only half the fun against the computer. It is especially suitable for very young players as it is not too overcrowded. 8 points from me."

RoyBean: "The good old days: Take a breadbox (C-64), two joysticks, a student accomodation and Pitstop II and the evening was saved. If the opponent had just overtaken you and his tyre bursted shortly before the finish line, there was really a great mood in the house. I also give 8 points."

Shakermaker303: "Well, in the 2 player mode one of the top games ever! Very nice to see when a human opponent was out due to a tyre damage. One drove past its racer "parking" in the grass with extra-slow speed and made fun of him. Very nicely made concerning the sound, the game got very exciting concerning the speed and I also liked the graphics (though the same all the time) much. Also still okay in the 1 player mode. Best entertainment guaranteed! 10 out of 10 points."

Since 08.08.2008 the game is available for the Nintendo Wii Virtual Console as download. 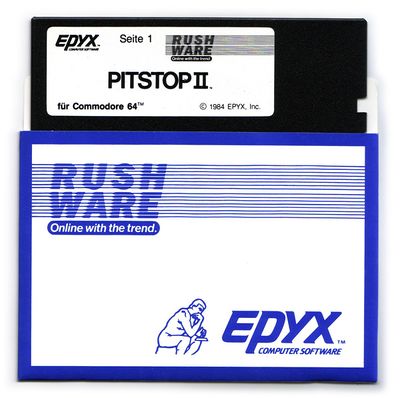