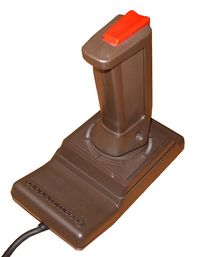 A joystick is a gaming control device. The C64 is compatible with an old standard first used in the Atari 2600 gaming console; the same standard used on the VIC-20, the C128 and the Amigas.

Joysticks that are compatible with the 64 have a stick that the user may push in one of eight directions, and a "fire" button. The control stick is mechanically connected to four switches; "up", "down", "left", and "right". Pushing the stick in a direction in between two of these "cardinal directions" activates two of the four switches.

Some Commodore compatible joysticks may have more than one such fire button, but in those cases both buttons will "do" the same things in a game; the software has no way of determining which fire button is used. Together with the directional switches for the control stick, a standard joystick requires five connections and a common ground wire.

Some joysticks have a feature known as "auto-fire", to help out in those games where the best strategy is to shoot, shoot, shoot all the time: An oscillator delivers fast repeating pulses to the line normally connected to the fire button(s). Some people have made hardware "add-ons" that adds auto-fire capability to any joystick.

Joysticks as seen from the C64[edit | edit source]

Besides ground and five inputs for the switches and buttons, the control ports also provides +5V (the aforementioned auto-fire feature is "fed" from this supply line) and two analog inputs, designed as "ohmmeters": These analog lines are mostly used for paddles, but despite the possibility to use these lines for an analog joystick (which can sense much more subtle movements to the stick than the four directional switches), such joysticks have never seen much use on the 64.

The memory addresses 56321 (Control Port 1) and 56320 (Control Port 2) contain the exact position of the joystick. These positions can be read with the BASIC-Command PEEK.

Which means that Joystick at Port 2 can be simulated by holding space and pressing:
M for Fire
F1/F2 for Up
Z for Down
C for Left
B for Right
Combination (eg. Up+Left+Fire) works fine, although it is rather bothersome to punch that in.
Tested on Commodore 128D original keyboard


Starting with the Commodore 128 (BASIC v7), the JOY command was introduced.

This BASIC-program uses the joystick (port 2) to move an arrow on the screen.

Hint: Replace the lines 51-58 with this code for bit wise joystick input handling.