QuickShot was a series of joystick models from the company Spectravideo. Towards the end of the 1980s, QuickShot joysticks were produced by Bondwell. The Most QuickShot joysticks are well-known for their characteristic clicking sound when moving the stick. This noise results from the use of spring-loaded switches, which are also the main source of problems with these joysticks as they are fairly fragile. This puts them at a disadvantage compared to other joysticks. With the rising spread of PCs in the late 1980s and early 1990s, the product range was expanded to include MIDI keyboards and computer mice. 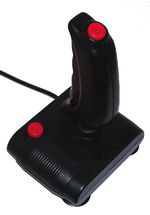 A low-priced joystick which featured an ergonomically-shaped handle with a top-mounted fire button and a second fire button (electrically identical to the top button) mounted on the base. This model was quite popular due to its low price and preciseness without a notchy feel. The disadvantage of this model is its relative lack of robustness, due to its inexpensive construction and use of dome switches (similar to those used in the Atari CX40 joystick). 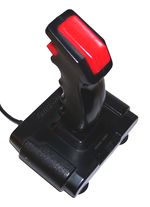 The QuickShot II introduced a more comfortable handle featuring a trigger button and top-mounted fire button. This model also added auto-fire, activated by a switch on the base. 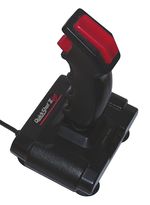 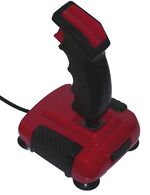 The QuickShot II Turbo is functionally the same as the QuickShot II Plus and shares the same handle, but has a redesigned base. The base is now molded in red plastic and has black handgrips on each side. The auto-fire switch now features a setting which allows for compatibility with the Amstrad CPC series of computers. This joystick was also sold under the Sigma label.

The QuickShot III was made for use with the ColecoVision, and features a numeric keypad along with two independent buttons. It is compatible with the C64 and other systems which use Atari-compatible controllers, but the keypad and second fire button will not function.

The QuickShot IV is a variation of the QuickShot I and features three swappable joystick handles, each one intended for different types of games. 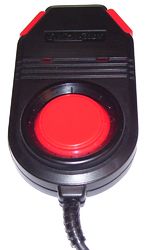 The QuickShot VII is a type of joypad with a thumb-operated directional pad. The fire buttons are controlled with the thumb or the index finger of the other hand. Both fire buttons are equipped with auto-fire which cannot be switched off. Two red LEDs flash with the pulse of the auto-fire when keeping either fire button pressed.

The PCB uses four metal prongs for the directional pad contacts and two dome switches (as used in the QuickShot I and II) for the fire buttons.

The QuickShot IX appears to be a trackball controller, but in actuality it functions like a normal joystick. The "trackball" is actually a large dome which can be rocked in eight directions, and has two large fire buttons near the dome. The QuickShot IX uses microswitches and was molded in beige plastic with gray fire buttons. The QuickShot IX also features a switch so it can be used by either left-handed or right-handed players.

Under the Sigma label, the same model was sold in the black/red color scheme.

Advertisement from the 1980s
Retrieved from "https://www.c64-wiki.com/index.php?title=Quickshot&oldid=35778"
Categories: