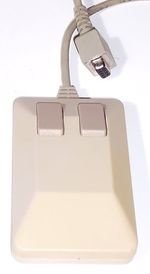 The mouse is an input-device and is mainly used for navigation on graphical user interfaces (GUI), but also in computer games and applications. Whereas for the C64 there are only few applications where the mouse can be reasonably used, it has found its place next to the keyboard on computer systems PC and MAC as an input-device.

The conventional computer mouse was developed at the beginning of the 80's and consists of a running ball in a handy housing. With sensors the movement of the ball in x and y direction is measured and signaled to the computer. The corresponding programs then process this signal and e.g. place the pointer on the right position in the screen. For a consistent operation, a smooth surface underneath the mouse was created by placing the mouse on an anti-static mouse pad.

Additionally computer mice have one, two or more functional buttons, sometimes an additional mouse wheel for easier reading of long texts on the screen. A standard conventional computer mouse has two buttons on the top, one left and one right whereas the left button is usually used for navigation, marking or selection of menu items. Since the 90's the usage of the right button for the context menu has been established. Nowadays the configuration of additional buttons can be set by using the mouse driver.

The development of computer mice has proceeded, so there are more models, which not only use the serial or parallel interface of the PC, but also can be connected by the PS/2, USB, firewire or bluetooth port.

Furthermore the computer mouse became more independent by the use of radio transmission and the maintenance requirements (cleaning and/or wearout of the ball) were diminished by the use of optical techniques for positioning.

The mouse and the C64[edit | edit source]

With the C64 PC-computer mouse were connected over the serial interface or the userport, by a corresponding interface card. The usage of the controlports was rare, there is a special adapter for this Micromys

Mouse especially made for the C64 were by default connected to the controlport. Basically there are two different types of mouse with the C64. The difference can be found in the operation method and the interface respectively.

The advantages of an analogue mouse are the detection of the movement speed and the "position" of the mouse. Normally with this mouse two buttons can be queried independently from each other. The signals are similar to the paddles processed by two A/D-converters of the soundchip. The analogue mouse is most suitable for GEOS, but also some games support it.

There is only few C64 software for which a mouse is needed or a mouse can be used for the navigation. The most important are mentioned below: