The game was released for the first time in 1991 for the Amiga and was after that converted to almost all well-known platforms.

In Lemmings you cannot control the actions of your small friends directly. Instead, you need to lift up some of them to a higher level of the lemming-being by giving them useful skills and talents. Only this way you will succeed in bringing these lemmings (and its friends) unharmed to the exit. To be able to allocate the different skills, choose the corresponding icon from the bar and assign it to the lemming of your choice.

As lemmings are not very intelligent, they always walk into the same direction until they meet an obstacle. Then they walk into the opposite direction. The player has eight options with each a certain number to influence the lemmings.

Aim of the game:

A certain number of lemmings needs to be directed into the goal within a certain time.

2D screen that scrolls to the left or right when the cursor adjoins the border of the game section. The width of the section was minimized a bit to avoid time problems during the screen buildup. Great graphics with many animated lemmings and fitting music. Well solved controls by mouse + keyboard or joystick + keyboard.

Keys in the menu:

Keys in the game:

Passwords for the single levels:

FXXS: "Is as much fun as on the other systems."

TheKills: "I have to confess that this part is miles better than many followers... as e.g. Lemmings 3D ;) There all the charme got lost."

Ragnarok: "Highlight! To rescue (or bomb, har har) the hairy bustling lemmings is also loads of fun on the C64 - mouse urgently recommended." 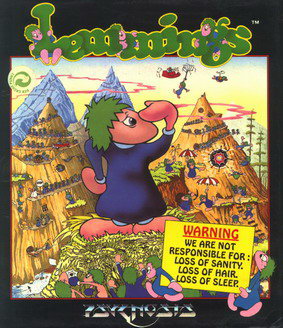 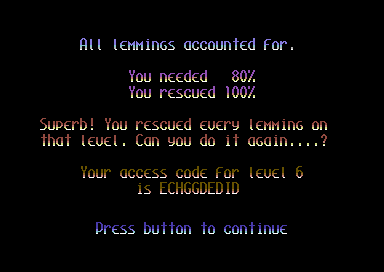