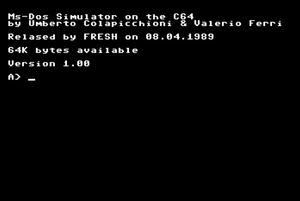 A MS-DOS Simulator for the C64.

Commodore DOS conforms to a standardized text command interface between the host computer and the intelligent peripheral.

The commands and feature set supported by the DOS is dependent upon the model of disk drive attached to the host computer.

These DOS version and systems aren't compatible together!

Overview of differents DOS for the PC from different software producers:

In the years 1986 until 1988 a Italian programming team developed a MS-DOS Simulator, which are simulated important commands of the COMMAND.COM.