A piece of the story!

Lucasfilm Games did sense nothing of the ground-breaking success that kept their classic point and click adventures on place 1 of all the charts for years. Maniac Mansion was the debut feature (apart from Labyrinth) and flagship of a series of games that were created with the SCUMM engine.

Strange people live in Maniac Mansion. Dr. Fred, a "pensioned" family doctor, who became a crazy scientist; sister Edna, a former professional caretaker, whose hobbies would even make a sailor blush; "Weird" Ed, a militant youth with a hamster tic and then there is the dead cousin Ted, and the tentacle, and someone - or rather something - else... And what does the sweet young cheerleader girl named Sandy do in Fred's cellar?

Your aim is, to lead a team of three students (including Sandy's boyfriend Dave) through the house to rescue Sandy. During this "trip" you will encounter all the strange residents of the house. And furthermore you will get to know Dr. Fred's secret desire, which he has since the impact of a strange meteor near his villa, that is to control the world.

You put together a team of three persons, that you can choose from seven youths. You will notice that each of them has a special skill, talent and weakness. Furthermore, each of the crazy dwellers as aims and wishes, that will help or hinder you, depending on how you treat them. The story and your attempt to rescue Sandy change, depending on what teenager you choose and how you treat the things and people in the house.

Each of the possible stories in Maniac Mansion is a very big, complex puzzle, that again consists of smaller puzzles. From time to time movie-like sequences reveal hints about the story or show things, that happen somewhere else. If you discover smaller puzzles that form single threads of the story, you will notice that most of them need to be solved in a certain order. There are always several ways to approach a problem. But there is also always a best way.

Rescue Dave's girlfriend from the house of a crazy professor who kidnapped her and holds her captive in the horrible dungeons of the old villa. Don't let yourself get upset by tentacles, meteors, slime and jokes.

Maniac Mansion contains a graphic parser that is controlled by joystick and cursor, i.e. here elements of a sentence are clicked and this results in the desired command.

At the upper rim of the screen is the message line. Everything that is said in this game, will be shown in this line. Also game related notes are shown e.g.: Put in side 1 of the disk and press fire button. The two underlyind thirds show the surrounding, persons, items and everything that can be interacted with. In the lower third is a series of selectable verbs, with which you build sentences connected with the game world, e.g. "Pick up key" or "Use key in door". At the bottom there is the inventory, the things that you own.

In this adventure also "cut sequences" are used. These are short animated scenes - as scenes in a movie - that contain hints and can reveal information about persons. During a cut sequence you cannot interfere in the events. Hence the text below the graphic window is removed.

It is interesting, that you can form a team of three persons at the beginning. Dave (Sandy's boyfriend) is always in the team. So you can pick two more teenagers. You can win the game with any team, but the story and some of the puzzles will be different, depending on the combination of the members.

To switch between the three players choose the word "New kid". The name of the three youths then appears in the line of the sentence. With the cursor click the name of the player, that you want to control. As a shortage you can also use the F-keys. F1  , F3   and F5   are the keys with which the teenager can be chosen. The keys are attributed in the same order, in which the names appear in the screen, when you work with "New kid".

What things are in a room, can be found out by clicking the verb "What is" and then moving the cursor over the graphics window. When then name of an object appears, you will know that this is an "active" item, i.e. somewhen in the game it might be useful.

To be able to switch off the computer once in a while without having to start the game again later, it is possible to save the game. For this you press the keys Shift   + F1   and put a save disk (an empty disk or a disk on which there is already a saved game) into the floppy. The you click onto the option "Save this Game". An existing saved game will be overwritten!! But this option doesn't work during the cut sequences. You can save only one game per save disk.

Loading a saved game works the same way. Press the keys Shift   + F1   and put a save disk (a disk on which there is already a saved game) into the floppy. Then click on the option "Load a saved Game". Also this option doesn't work during the cut sequences.

A cut sequence can be skipped by pressing the key F7  . This function will be very useful, when you have played the game repeatedly and want to leave out the known sequences. To skip the title sequence, also press the key F7  .

To pause the game press the Space   key. Press it for a second time, to continue the game. The computer will stop the game automatically, when you make no input for five minutes.

The cursor cahnges, when the computer accesses the disk or the game was stopped (snail symbol). The speed, with thich the texts appear in the message line, can be changed by pressing the keys +   (faster) and -   (slower).

Tips for the start

The way to open the secret door

Jodigi: "Lucasfilm created a really exciting, enthralling and interactive adventure at that time, with which I had fun over scores of game rounds. And the one who cannot get enough can try it with the different combinations of characters (each with its advantages and disadvantages). Maniac Mansion is sort of one of the first interactive movies."

Jammet: "Maniac Mansion is one of my favourite games by Lucasfilm. Unfortunately, there are only two of them for the C64, and Zak McKracken is even a hint better. The puzzles are constantly solvable. In contrast to the Lucasfilm games that are common today, there are situations in Maniac Mansion which make advancing impossible. However, you need to work hard to get that far. Furthermore you can isntantly see it, wenn you have lost your way. Maniac Mansion can be recommended without limitation to those, who cannot get enough of funny, crazy professors and cranky humor."

Guybrush: "The starting shot for one of the best game genre that exists, the grafic adventure. A trend-setting master piece in the history of games, which really would deserve 11 out 10 points!"

Andy027: "This game was the basis for further successfull blasts by LucasGames! Guarantees long fun, great puzzles and above all, the addiction to more LucasGames. The best thing in Maniac Mansion: the exploding hamster! In Zak McKracken can the microwave oven only be misused for a raw egg..."

TheKills: "A piece of gold! The SCUMM application was a bit slow, but it is unbelievably ingenious. It is ground-breaking what has been anticipated here for the games in the 90s (graphic adventures). I loved it and I still love it today. I thought the diversity of the solution methods more interesting, even though Zak McKracken takes longer.

mombasajoe: "A new definition of the adventure genre and a milestone of the software history. If the game had pardoned some more mistakes, I would have given a 10. But due to some frustration (game is not solvable after certain actions) I give "only" very good 9 points."

Shakermaker303: The game is really an interactive movie, where the viewer can influence the plot. Unbelievable, how many things you can try out and how many possibilities you have to do something with the characters. Very funny story, nice graphics with funny details and animations, catchy title music - simply an adventure highlight. Lucas-Arts has launched something there. 11 out of 10 points ;-)

Snake Slobodan: "I played this game for days, weeks and months. Great conversion, funny ideas and good music - a real classic. Still today I like playing it now and then on the emulator. And therefore it also gets from me deservedly the highest points of 10."

(This does not work in all conversions, on the NES you can in return drown the hamster in the toilet - also not much better...). The hamster-in-the-microwave was also "warmed up" in the follower "The Day of the Tentacle" - in the truest sense of the word.

If you fall into one of the following traps, the game will get insolvable, therefore it is wise to save before you reach the critical points.

Since 2009 there is a GOLD version of Maniac Mansion by Onslaught for the owners of an at least 512k-sized memory extension of the type NeoRAM or GeoRAM. With this version you can enjoy the game without long loading times.

Since 22nd November 2010 there is a Maniac Mansion Mercury version

by Onslaught for the owners of the EasyFlash cartridge.

Since 17th Märch 2011 there is a version by Onslaught in 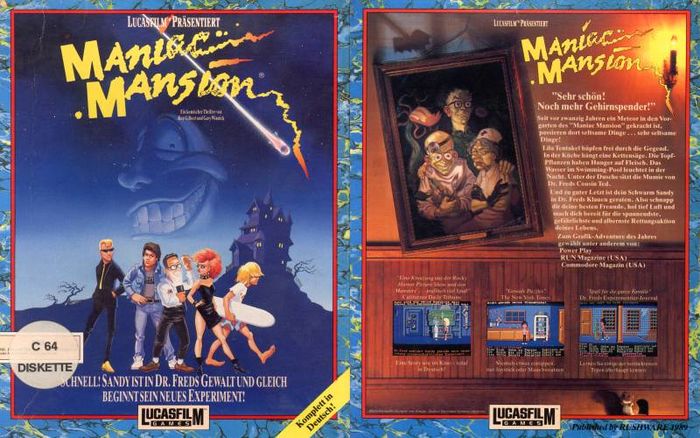 In this game there are no points or a highscore.

According to the personal taste you can end the game by different solution methods and keep alive as many friends as possible or let them die...

With the Easyflash version of MM & ZMK the time used to complete the game (also in savegames) is recorded and can be viewed by pressing T  in the savegame menu.