The goal of the game Brickout is to clear the game area of all bricks. Stones are removed by placing the cursor (the hammer which follows the movement of the joystick) on a row of stones and pressing fire. The row can be vertical or horizontal (not diagonal) and must at least have two stones of the same colour. The more bricks of the same colour are removed at once the higher the score will be for that move. When all stones in the level are removed, the level is solved.

Furthermore there is the possibility to topple the game area around the horizontal axis ("flip" - i.e. all stones lying on the top will lie underneath the others after this action and vice versa), or to push the leftmost row out of the screen and in again on the right side "shift" to improve the positions of the stones.

In the higher levels stones start to slide, i.e. if a row has been fully cleared and by this two rows of stones can close the gap, the upper stones will slide to the side (if there is space) and fall to the row lying next to them.

If you play in the difficulty level "Hard", a fifth brick colour appears on the game area, which makes it even harder to clear the level.

There are 99 levels in the game which can be chosen randomly to start from. There's also a hidden level 100 as well as the possibility to play all 99 levels in a shuffled order within each difficulty stage. Each level has an own highscore list with each the 10 best and 10 worst entries, which are also saved on disk.

The game has been programmed entirely in assembly language. The sound effects match the movements of the bricks very well. The game can be controlled by mouse or joystick. Those input devices are also used for entering the players' data. High- and lowscores are saved onto a separate disk. The name of the last player from a previous session is automatically restored.

There are 3 difficulty levels:

If you make it to clear all bricks in one level you receive a Bronze, Silver or Gold Cup according to the difficulty level.

This menu appears after loading the game. As in all other menues the hammer serves as cursor that can be moved with the joystick, for confirming a press of the fire button on the chosen option is enough. In this menu the following sub menues and function can be chosen: 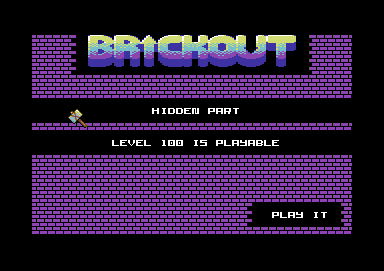 Sledgie: "The game is highly addictive and makes a lot of fun. Graphics and sound effects match the gameplay very well."

Robotron2084: "Exemplary puzzle hit with great catchy song, which you can and really need to stick to for a loooong time. Hats off for this great work, boys! 9 out of 10 points."

Blubarju: "A really good and motivating logical game with many features. Which other game has next to a high-score table also a low-score table. 8 points!"

For this game no official cover was released. 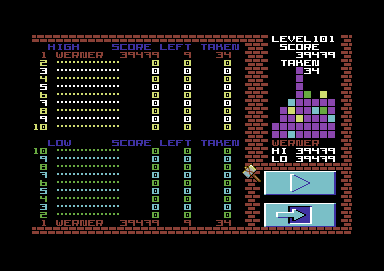 Table for high and lowscore of all levels[edit | edit source]

Prollcoder The game is sold exclusively by Prollcoder.com - current versions can be found there first.