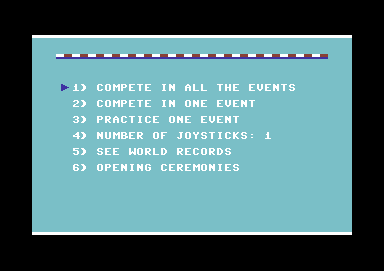 Experience the challenge of the greatest sport competitions of the world: the "Olympic Games", whose origin lies in the ancient world and probably in the 2nd century B.C.. With the ceremonial opening ceremony the time starts for which you have worked and trained so long to compete with the best athletes in the world.

That a graphic artist took part in the development of the game, is straight away apparent. The movements of the sprites (athletes) are extremely subtle and smooth, a true pleasure to watch. Also the background graphics and the scrolling are super for this time (1984) - and this in a sports game. Furthermore, there are the different option screens which are kept simple but well-arranged. The "cherry on top" though, is the fact that you can choose the country for which you want to compete and that you can hear the hymn of this country (even if it is not always the right one). Also controlling the athletes is intuitively and realized fast.

You just have to look at the animation of the intro (right) . . .

At Pole Vault you need to swing yourself upwards and cross the bar. Before the jump starts you need to confirm the height and define the grip type. After confirming that with the fire button the athlete starts to walk and the player will define when the pole is lowered, the athlete will swing up and when he lets go of the pole. IF the timing was precise the pole stays standing upright and the bar stays in its hold. With enough practice this discipline can be managed well, as the background graphics offer good leads for the timing.

The jump from the 10m tower unfortunately only contains somersaults with different speeds, so it is the most important thing to reach a clean plunge into the water (without splash). Four jumps need to be done:

At 4x400m Relay you tactically control the power resources of each runner and the handover of the stick. You start and speed up by pressing to the right, keep the speed through a neutral position and you save the powers by pressing to the left. Handing over the stick is done by fire button, when both runners are close to each other.

The dash is the most straining discipline: the one who shakes fastest right/left is also the first on the finish line...

At Gymnastics at the horse you need to show elegance and timing. The simple flip gets you 6 points, but for this you need to hit the board (fire) and land properly (down). For higher difficult grade you are awarded up to 10 points: for this you make an additional half twist after the jump (right), strongly push yourself off the horse (fire) and make three somersaults (up). If the athlete is not balanced after the landing, you can correct it with right or left before she falls.

In Freestyle Relay it is again about endurance and timing. You have to initiate the jump at an early stage to leave the starting block at the right moment. During swimming while immerging of the arms the pressure needs to be raised by pressing fire and also the turn needs to be done by the player. Shortly before the swimmer reaches the stop after one hundred meters, the next swimmer will start its jump.

In 100m Freestyle everything goes exactly as in the relay, except with only one swimmer... The right timing for the jump and the correct turn can be checked well here.

Reflexes and precision are necessary for skeet shooting. 25 skeets need to be hit from 8 positions. The skeets are catapulted from two towers and fly from the left and from the right and sometimes from both directions at once. Speed and gravitation are the enemies of the shooter. You only have one shot per skeet... 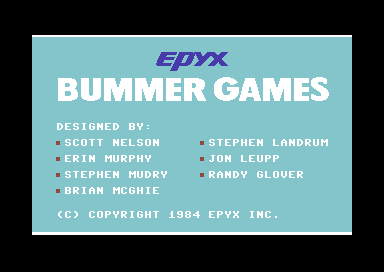 FXXS: "All disciplines are controllable after a short time of training, the graphics is not consistent, but for each discipline it is in any case functional. Only during the dash it is a pity that the camera only keeps the one in the middle of the screen that is the fastest, so the worst runner is not visible any more. My personal favourites are Pole Vault, Gymnastics, Swimming and Skeet Shooting; Platform Diving could have been a bit more complex and the dash is just shaking. 10 points, because it is combinable with Summer Games II and it gets a small "beginner bonus"."

Mombasajoe: "At that time, the same as today, Summer Games could not quite convince me. The controls for all disciplines are okay, but what use is this, when a part of the disciplines is just boring? Each one running and swimming discipline would have been enough. Skeet Shooting seems like a stopgap. Moreover there is a throwing discipline missing. Pole Vault and 4x400m Relay act as graphically poorly conceived. That the age of the game cannot be an argument, shows Udo Gertz's "Summer Events" for the C16 (!), where with an overall graphical superiority especially Pole Vault and Swimming darkly eclipse the events of Summer Games."

Spaceball: "For me it is the terrific prelude to terrific games series, especially in the combination with Summer Games II. Of course here also counts, that the game is not very much fun, when played alone. Especially in a chummy group these games can fully convince. I cannot agree with my previous speaker, as Summer Events came full 3 years later. Summer Games is surely graphically not the best filed game of its time, but the graphics is in no case bad. Decathlon came about the same time on the market and graphically it cannot or only hardly convince me, while Summer Games can do that still today."

Shakermaker303: "Well, everything is quite nice, and for the year of publication 1984 top graphics, nice intro, good menu, nice sports,etc...but somehow I like "Decathlon" a bit better concerning the handling and that is why I only give 9 out of 10 points. However, a cult game for the C64." 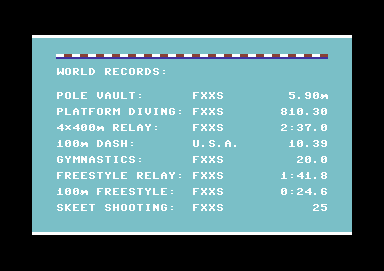 ° 3 disciplines with a shared first place...