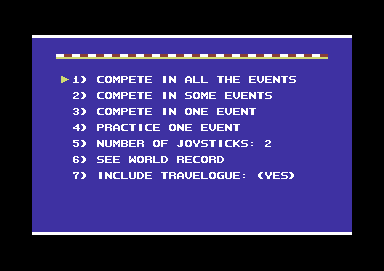 After Summer Games I and II and the Winter Games, follow now the World Games. World Games is another part of the Games series by Epyx. Up to 8 players can take part in the World Games. There are eight different disciplines, which take place in different countries, in two disciplines (Log Rolling, Sumo) there are two players playing at the same time. The judges evaluate every discipline and award medals (gold, silver and bronze). The points of all the single disciplines are added and at the end the overall winner is nominated. The game has a record list which is also saved.

You enter the competition twice, once in Clean and Jerk and once in Snatch. As soon as you have made it to lift the weight over your head and at least two lamps alight in white, the try is successful. At the end the results of both disciplines are added.

An ice skater jumps over as many barrels as possible on a frozen lake. The number of barrels can be chosen by yourself. A small green flag on the ice signals the jumping point for the player. If you forget to prepare your skater for the landing, you let him break into the ice ungently.

In this discipline you have to jump into the water from a cliff, whereby you have four different heights to choose from. From the top, the jump is much more difficult, but there are also more points to get. For once you need to find the right moment for a jump, as the water constantly rises and falls. In the moment of immersion you need to be fully straight, in the flight itself you can still correct the posture.

You have to drive through the marked gates into the finish as fast as possible. Good knowledge of the track is helpful. If you hook a gate you are disqualified. If you miss a gate you get 5 seconds penalty (per gate).

Two players balance on a log that is swimming in the water. By moving the legs the log is set in a rolling motion. The aim of the discipline is, to overbalance the opponent. The one who falls into the water first has lost.

You have to try to keep yourself on the bull as long as possible. You can choose between 5 different bulls. The wilder the bull, the more points you can get.

The aim of this event is to throw a caber which is four times as heavy as you, as far as possible. You get a valid try, if the caber lands on the far end and overturns forward.

You have to try to either push the opponent out of the circle or get him on the ground.

2D screen. Graphics, sounds, music pieces and animations are great, the figures are funnily animated. The type of scrolling depends on the discipline. Before each discipline a screen is shown with a description of the sport and the history. The many funny interludes and gags, that the programmers came up with, are remarkable. The weightlifter first turns red in the face and then breaks through the platform when he holds the weight too long, the caber toss athlete can ram himself into the ground and the sea gull shakes its head when you are too clumsy. As in the previous games, every player can enter his/her name and choose the country of origin with a flag at the start of the game. After each discipline the results of every participant are displayed and the national hymn of the gold medal winner is played. The highest number of points in each sport and the name of the player who had reached it are saved on disk and shown on the world record list.

Description of the sports[edit | edit source]

Weight-Lifting - The scene for this event is Russia, home of the best Olympic weight lifters in the world. The Soviets have ruled the "Iron Game" since 1960, when 360-pound giant Leonid Zhabotinsky squashed his competition by hoisting 1262 pounds in three lifts. Weight lifting is more than a test of strength - it is also a sport of strategy and style. The "snatch" and "clean and jerk" require timing, skill and determination.

Barrel Jumping - Barrel Jumping takes you to Germany where skaters compete to jump over the most barrels in a single attempt. The sport started about 300 years ago in Europe where ice skating was a common form of transportation. In their dash before take-off, jumpers hit speeds above 40 mph, risking painful bruises if they fail to clear the last barrel. However, barrel jumpers keep protective gear to a minimum for lighter weight and longer leaps.

Cliff Diving - The cliffs of sunny Acapulco, Mexico, provide the setting for this dangerous sport. High on a cliff named La Quebrada ("the break in the rocks"), courageous divers launch themselves from a craggy ledge towards the crashing surf far below. To avoid the rocks at the cliff base, divers have to jump outward 27 feet during their 118-foor descent. Diver Raul Garcia has taken the leap from La Quebrada over 35,000 times.

Slalom Skiing - The setting for this event is Chamonix, France, where the first Winter Olympics took place in 1924. Skiing originated in Norway thousands of years ago. Ski racing dates from the earliest days of skiing in Norway, and modern slalom racing probably evolved from traditional Nordic obstacle races. Slalom courses are designed as a test of reflexes, agility, precision and control. Of course, speed is vital - but skiers rarely exceed 25 mph in the slalom.

Log Rolling - Log rolling brings a visit to Canada, where two lumberjacks try to dislodge each other from a large floating log, spinning it back and forth until one contestant plunges into the icy river. (Splash.) Needless to say log rolling requires great balance and agility. Log rolling began in Canadian lumber camps around 1840. The novice lumberjacks always gets the same piece of advice: "Never take your eyes off your opponent's feet."

Caber Toss - The heather-splashed hills of Scotland are the birthplace of the ancient caber toss. In this famous event from the Scottish Highland Games, athletes lift and throw a tree trunk the size of a small telehpone pole. Cabers vary in size, but once tossed successfully they can never be shortened. The Braemar caber, one of Scotland's greates challenges is 19 feet long and weighs more than 120 pounds.

Sumo Wrestling - Sumo is an ancient Japanese sport with many traditions. Two huge wrestlers grapple in a clay-surfaced ring, trying to topple each other to the ground or push each other out of the ring. In one part of the elaborate pre-match ceremonies, the contestants throw salt to purify the ring. Japanese boys must weigh 160 pounds at the age of 13 to enter sumo appprenticeship, and today's professional sumo wrestlers often weigh 400 pounds. The heaviest sumo wrestler fighting in the uppermost Japanese division, the Makuuchi division, was the Hawaiian Konishiki, who weighed over 600 pounds at a height of 1,84 m at the end of his career.

only 1 disk side (space saver)

no turning of the disk

world records can be reset

only 1 disk side (space saver)

no turning of the disk

Then 101 points are possible! - Roland

Werner: "Entertaining disciplines which are mixed up with funny animations."

FXXS: "Well, my opinion is split: On the one hand, the disciplines are diversified, the graphics is on a high level and the travellogs are a new idea, but on the other the all-around feeling is not there as with Olympic Games... 8 points for a collection of solid single games, which contains something for almost everyone."

Goondoc:"I was very pleased at that time the hear a new title from the Epyx "Games" series being announced, however, the game stayed a bit behind my expectations. It was without doubt done very nicely, but somehow the disciplines were not quite able to enthuse me at that time. Except for "Barrel Juming" and "Cliff Diving", which tied me to the game for some hours. In my opinion clearly the weakest "Games" title. Therefore only 6 points from me.

H.T.W: "The disciplines seem a bit conglomerate, but the graphics, sounds, etc. are great in return, but the best is the funny intermezzos and gags, with which the programmers came up. It doesn't happen seldom that you see a missing weight lifter or a caber toss athlete hopping around. A game for many entertaining hours, just a classic!"

Shmendric: "Concerning the gameplay it is rather unaspiring and in some disciplines just stupid. But nevertheless I gave 7 points for the great graphics at that time and the creativity. For me the best game of the series."

Bamse: "I already liked some disciplines at that time, others were hardly played. Altogether a very good game, but not so cool and "all of a piece" as Winter Games..."

Flexman: "Well, from all Epyx games surely the one, that we have played most often. Nice animations for the different mistakes, great events where also not so practiced players have a chance here and there. Therefore it was also played very often and with many friends probably the most popular of the Games series. 10 points!" 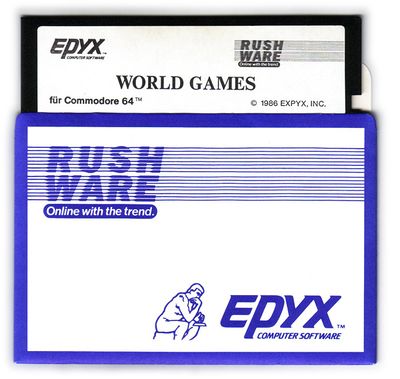 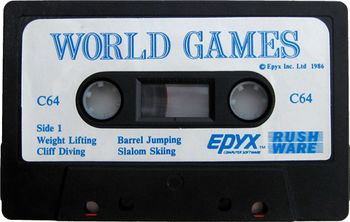 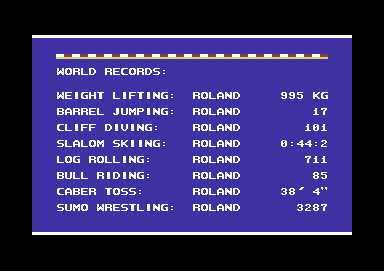