A sprite, also referred to as a Movable Object Block (abbreviated to MOB) in Commodore literature, is a piece of graphics that can move and be assigned attributes independent of other graphics or text on the screen. The VIC-II, which is responsible for this feature of the C-64, supports up to eight sprites, but through the use of raster interrupt programming more than eight sprites may be displayed simultaneously.

While managing sprites is notorious for the flurry of POKEs necessary to set them up, their big strength lie in the ability to quickly and easily move a graphical object and change its shape, merely by specifying coordinates and setting a pointer – eliminating the need to constantly draw and erase graphical objects pixel-by-pixel. 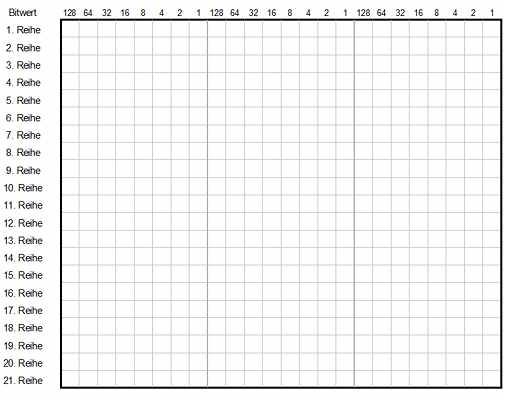 Data for a high resolution sprite

This arrangement "interleaves" one unused byte in each avaliable 64-byte "block"; the contents of this "64th byte" has no influence on the sprite's appearance. In theory, one VIC-bank with no ROM charset mirror can hold 256 sprite patterns, but allowing for a text screen and a character set, the practical number is no larger than 208 different patterns.

To the right is a 24×21 raster image depicting a solid circle: The grid is divided into "strips" of 8 pixels, or bits, i.e. into individual bytes. Each byte is read with the leftmost bit as the most significant, and the rightmost bit as the least significant one. The bytes are read from left to right, row by row (just like reading ordinary text), and converting the bit pattern for this example into decimal byte values yield the figures indicated to the right of the grid. The 63-byte sequence forming this sprite thus begins with 0, 126, 0, 3, 255, 192, 7, ...

Since a bit can assume one of two states, each pixel in a high resolution sprite can do one of two things:

In multicolor sprites the bits are grouped in pairs, forming pixels that are twice the width of high resolution pixels. Since each such multicolor pixel is defined by two bits of data rather than one, each pixel can do one of four things:

Note that two of the three "visible" (non-transparent) colors will be common for all eight sprites, whereas the third visible color may be set individually for each sprite.

The construction of sprites by hand is very hard, so that you should use a sprite editor. In some BASIC expansions like Super Expander 64, Supergrafik, Simons' BASIC or in BASIC 7.0 exists tools, other helps and more commands for developing and programming sprites easier. For example the BASIC command SPRDEF in BASIC 7 of a C128 or in Super Expander 64 runs the sprite editor.

By programming sprites in a BASIC program, the sprite datas should also put into DATA lines and read into the RAM with a FOR-NEXT loop and the BASIC commands READ and POKE - for example:

Besides setting up data for the pattern in RAM, using sprites involves some further initialization work. In the following discussion of the sprite-related VIC-II registers, the eight sprites are consequently referred to as sprite #0 thru sprite #7.

To make a given sprite show the pattern that's stored in RAM at an address A (which must be divisible with 64), set the contents of the corresponding sprite pointer address to A divided by 64. For instance, if the sprite pattern begins at address 704, the pointer value will be 704 / 64 = 11.

Each sprite has its own set of coordinate registers, which determine where on the screen the sprite appears, as indicated in the table to the right. However, the sprites can move across more than 256 pixels in the horizontal direction, and so their x coordinates require nine bits; one more than the eight available in each of the addresses shown.

Both multicolor and high resolution sprites have one "transparent" color, and one "solid" color that can be individually set for each sprite, using the addresses specified in the table at right.

Besides these two, multicolor mode offers two more colors which are common for all eight sprites:

By default, i.e. without the use of this feature, a sprite will cover an area 24 (high resolution) pixels wide and 21 pixels high, but by setting bits in registers 53277/$D01D and 53271/$D017, each sprite may be individually "stretched" to twice the width and/or twice the height. In both registers, the least significant bit affects sprite #0, and the most sigificant bit sprite #7.

Notice that regardles of whether the sprite has been "doubled" in either or both directions, the graphic pattern displayed by the sprite still comes from the same 63 bytes: The expanded size comes at the cost of more coarse, "blocky" graphics.

The sprite-sprite priority is fixed! Here sprite 0 (white color) is always in the front of all other sprites. By using different colors a 3D effect is achieved.

In the context of sprites, "background" refers to the text screen or other "non-sprite" graphics shown on the screen along with the sprites: Through manipulating the bits in address 53275/$D01B, sprites can be set to appear "behind" (bits set to "1") or "in front of" (bits set to "0") such background graphics. The least significant bit affects sprite #0, and the most sigificant bit sprite #7.

Note that the priority amongst the sprites themselves are "hardwired": A sprite with a lower number will always overlap, or appear "in front of" a sprite with a higher number; e.g. sprite #3 will appear in front of #5, should they happen to overlap.

There are two VIC registers that can be polled to see if a collision involving sprites have occured:

As with all other "one bit per sprite" registers, the least significant bit affects sprite #0, and the most sigificant bit sprite #7.

Reading out the sprite collisions bits.

This BASIC program demonstrate a few sprite options of three sprites (multicolor and standard/uni-color). The REM-lines are only used for remarks (also with the REM command the BASIC lines are too long!). The variable V contains the start address of VIC-II.