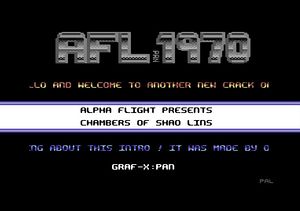 Raster interrupt is an interrupt trigger signal that the VIC-II can supply, if desired, to the CPU whenever the raster in the VIC's video signal reaches a specific line. With a bit of (machine code) programming, this mechanism can be exploited to perform many kinds of VIC "trickery", like having both text and high-res graphics on screen simultaneously, and displaying more than the eight hardware-supported sprites at once. This method is often used on the C64/C128 for computer games and demos.

Other 8-bit computers such as the Atari 800, MSX and Amstrad CPC can also use raster (line) interrupts. The 80 Character mode on the C128/VDC cannot use this method.

Setting up a raster interrupt[edit]

By default, the system is set up to receive timer-based signals from CIA-1's Timer A, but instead the VIC needs to be configured to deliver raster interrupt signals. This is handled by a small initialization routine:

Notice that enabling the raster interrupts from the VIC takes place after setting up everything else. If the interrupts are enabled before e.g. the interrupt vector is re-directed to the new routine, an interrupt may occur just as this vector is being altered, sending the CPU to a "random" address and probably crashing the system.

Here is a very simple interrupt service routine that that "wiggles" the screen frame color (53280) to indicate where on the screen the interrupt occurs:

When this is run, the frame, or "border", around the screen is mostly black, except for a yellow stripe at the left and right edges: This stripe appears at raster line #210 as set in the initialization routine, because just as the raster starts out on this pixel line across the screen, the interrupt service routine sets the frame color to yellow. During the pause loop, the raster swipes swipe through 8 whole pixel lines, leaving a 8-pixel-wide stripe before the color is set back to black.

Raster interrupts are often used with a system of two or more interrupt service routines, handling interrupts triggered at different raster lines: Each routine perfoms its "own" tasks, then sets up an interrupt to occur at the "next" desired raster line and re-directs the vector at 788–789/$0314–$0315 to point to the next routine associated with that line.

The following example shows two such "concatenated" raster interrupt service routines, splitting the screen in a high-resolution part and a text part: They can be initialized using the routine outlined at the beginning of this article.

The first routine is triggered at raster line 210, and handles the switch from high-res to text mode. It also sets up the interrupt pointer to the second interrupt service routine, and configures the corresponding raster line:

The second routine handles the switch from text to high-res at raster line 250. It also re-adjusts the interrupt pointer back to the first interrupt service routine, and sets up the raster to trigger it next time the raster passes by line 210: