The ZX Spectrum (nick name: Speccy) is an 8-Bit home computer, which was very successful in the 80s, especially in Great Britain and Spain where it was the best seller home computer. In Germany there is also a lively community of users. It was produced from 1982 to 1985 in its original version. After the takeover of the computer section of Sinclair by the company Amstrad in 1986, further compatible spectrum versions were created. Altogether about 5 million ZX Spectrum of all versions were sold worldwide until the end of production.

In 1986 the company Sinclair is bought by the competitor Amstrad after the failure of the Sinclair QL. After that only the computers Spectrum +2/+2A (with built-in tape drive) and Spectrum +3 (with built-in 3"-disk drive) are released.

From 1981 onwards the Spectrum forerunner ZX81 was built in the production sites of the company Timex in the USA as remittance work. As the production was not used to capacity in 1983, the company Timex produced ZX81 with their own name for the US market without any licence, the models TS1500 and TS2068 (with 48 KByte RAM and cartridge slot) and sold them for lower prices as the original model. The resulting arbitration process at court between Timex and Sinclair raised the publicity of the ZX81 and the spectrum also in the USA, so the production sites were now used to capacity. Sinclair expanded and founded a subsidiary in Frankfurt, Germany and an own production site near Bad Homburg, Germany, in Summer 1984. Furthermore, an own subisidiary had to be founded in the USA, as the company Timex retracted from the computer market at the end of 1984. 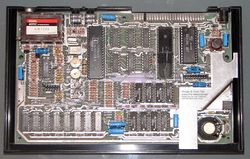 The ZX Spectrum is - same as the C64 - a keyboard computer, but built relatively small (24 × 15 cm), has a hard rubber keyboard and is equipped with less interfaces: 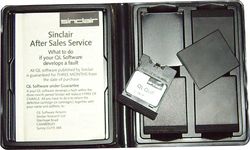 Due to the rather sparse equipment of the ZX Spectrum there was a large palette of several accessories, both by Sinclair itself and by other suppliers:

Included in delivery was an introductory book with 36 pages and a BASIC manual with 31 chapters, where also some details about the hardware were explained (as character set, storage allocation). 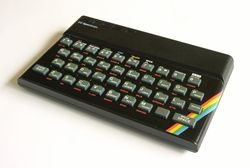 In the first year of production 1982 the buyer could choose between two versions of the ZX Spectrum, which differed only in memory size. The first, slightly cheaper version had 16 KByte main memory, while the second version offered the full memory of 48 KByte RAM. The Spectrum 16K could be expanded retroactively to 48 KByte. Due to the dropped prices of memory hardware the smaller Spectrum version was dispensed in favour of the 48K version from 1983 onwards. 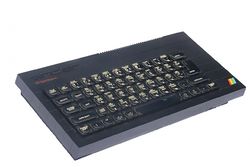 In 1985 a slightly improved version with a slighlty bigger housing as well as a modified keyboard was released as the Spectrum+. The keyboard now had hard plastic caps and was by this significantly better to use than the rubber keys of the previous models. However, as theere was still a rubber mat below the plastic caps, the key stroke was still not precise and could not be compared to professional keyboards. With the bigger housing, the temperature problems that had arisen previously in permanent use could be removed. As a further innovation, the Spectrum+ now had a reset button. 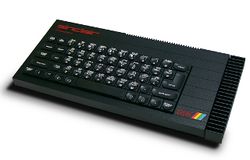 As an expansion of the product range the Spectrum128 was released shorty after the Spectrum+. Next to the improvements of the Spectrum+, it also came with an enlarged main memory of considerable 128 KByte and 3-channel sound chip of the AY-3-8912 type, which among others was also used in the Amstrad CPC, Atari ST or the MSX computers. Additional interfaces contained a serial RS2323 connector and an RGB monitor port. The internal speaker that had been used until now in all Spectrum versions was now left out. Instead, the sound signal, as usual in the most contemporary computers, emitted by the TV.
The additional memory could not be addressed directly by the 16bit bus of the Z80 processor, but only by the bank switching process which was common for the 8bit computers of that time. In the now 32 KByte-sized ROM there was a BASIC optimized for this, which offered the BASIC programmer the additonal memory in the shape of a RAM disk.
Due to the rather extensive changes in comparison to the previous models, the Spectrum128 had a special compatibility mode which was supposed to ensure the execution of older software. In this mode one had to abstain from all previously named enhancements in favour of the programme compatibility. However, no 100 per cent programme compatibility could be reached due to the big hardware differences, and numerous, especially newer Spectrum programmes, which made intensive use of the available hardware, did not work on the new computer or only with restrictions.

Ater the sale of Sinclair's computer section to the competitor Amstrad in 1986, they not only continued the production of the Spectrum series, but also had them developed further to improve the chances on the market. The result of this revision was at first the Spectrum +2, which was based directly on the Spectrum128. In contrast to it, the Spectrum +2 contained a significantly bigger case, which next to a finally fully-fledged keyboard also contained an integrated tape drive in the style of the in-house Amstrad CPC464. Furthermore, the new Spectrum was now equipped with 2 joystick ports. For the first time a model of the Spectrum series had not printed the double assignments of the keys on the keyboard. The until now common programming of BASIC via command input by a single press on a key was not possible any more without further ado. However, one could switch between the BASIC programming of the Spectrum 48K and the one of the Spectrum128 via an option menu. The latter was done as on other computers by normal keyboard input of complete commands. Of course also Spectrum 48K programmes could be entered and saved by this in the Spectrum128 command mode. Produced were three different versions of the Spectrum +2, which mainly differed in the colour of the housing (grey for the +2 and black for the +2A and +2B) and some internal details as well as a changed power suply.

In 1987 the final version of the Spectrum series was released in the shape of the ZX Spectrum +3. The main visible difference to the +2 was the integrated 3"- disk drive typical for Amstrad, instead of the tape deck. However, also more profound changes were done below the keyboard. E.g. the built-in ROM grew from 32 to full 64 KByte. They contained amongst others the disk operating system, as well as changed and improved bank switching routines. With their help it was now theoretically possible to use CP/M on the computer without further changes or upgrades. CP/M software was readily available on 3" disks having been made available in big numbers for the Amstrad CPC and PCW series for several years.
Due to the extensive changes on the ROM and mainly the used hardware, this last Spectrum version created the biggest incompatibilities both for programmes for the original version and for the Spectrum128. As additionally the expansion port was changed, the bigger part of the availabe hardware accessories as e.g. the popular Interface 1 or the Microdrive drives did not work at the Spectrum +3. Nevertheless was the +3 a success, as it could be sold for a rather cheap price (initial price 1987: £249,- from 1988 onwards only £199,-) due to the higher integrated and cheaper produced hardware and thus made a very good offer given the by now good equipment. An estimated 15% of all ZX Spectrums every sold were Spectrum +3.

After the new CPC Plus models were presented by the new boss Amstrad in 1990, the Spectrum +3 was stopped to avoid in-house competition. The Spectrum +2 on the other hand was apparently not seen as a threat to the new CPC generation and was allowed on the market for two more years. But finally the production of it and with this the history of one of the most successful computers of the 8bit era ended in 1992. With the last Spectrum also the name Sinclair bowed out finally from the world of computers.

With the Spectrum simulator for the C64 by the company Whitby Computers there was an implementation for the Commodore 64, with which BASIC programmes of the ZX Spectrum could be used in the C64 with certain restrictions.