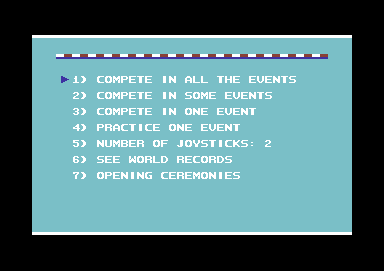 After Summer Games and Summer Games II Winter Games was released in 1985, the 3rd game of the "Games"-Series by Epyx.

The game can be played with up to 8 players, which altogether compete in 7 events. The players get points in each discipline. For each gold medal, you get 5 points, for each silver medal 3 points and one point for the bronze medal. The player with the most points wins the game.

In this sport your skill and precision on skis is tested.

For Biathlon not only condition in the ski run is required, but also exact timing on the shooting grounds. There are 20 shots to be triggered. The aim of this discipline is to absolve the track as fast as possible without any mistakes.

At Figure Skating the artistic execution of jumps and pirouettes is crucial. The mandatory or short program lasts exactly one minute and the figure skater needs to conduct seven mandatory elements (s. table of points). The aim in Figure Skating is to reach the dream mark of "6.0" from the jury.

In Ski Jump, the jumper sits on the "quiver beam" and looks deep down. Then the signal is given and he drives down the inrun of the ski jump. At the edge of the jump-off platform he jumps to show a jump as far as possible with nice posture and landing. The score that a jumper gets for his jump, consists of distance and posture. (distance*3 + posture marks)

At speed skating two skaters run directly next to each other in seperate runways. After the "GO" signal the athlete has to cover the 250 meter track as fast as possible.

Free skating lasts exactly two minutes and the choreography can be chosen arbitrarily. You can do the seven figures each three times. The elements are only evaluated, if they have been conducted successfully. The aim here is also to reach the mark of "6.0" from the jury.

At Bob Sled the player drives down audaciously the ice canal. Each wrong steering manoeuvre can lead to a bad crash. The player with the lowest time wins the race.

Each of the eight players can choose one of 18 nations.


After that the national hymn is played.

highscore is saved, but this file can be damaged by a bug

Werner: "The disciplines Hot-Dog, Biathlon and Ski-Jump are just great."

Guybrush: "A real classic which unfortunately only gets 9 points from me due to the two nutty and unrealistically realized ice-skating disciplines."

FXXS: "Really a pity that one has to struggle with Free Skating and expecially the Figure Skating, other disciplines (as e.g. Slalom from World Games) would have been clearly the better choice. The remaining 5 disciplines are just enough to reach 8 points when playing alone. As a tournament game it is as all "GAMES" almost unbeatable..."

Darkstar: "A game with much fun, especially when playing it in multiplayer mode. It is only a pity that sometimes you have got the hang of a few disciplines, so you get always full points (Hot-Dog, Figure Skating). However, the game gets 8 points from me."

mombasajoe: "Without Figure Skating, but instead with e.g. downhill it would have been a 10 for me. This way I give "only" a 9."

Shakermaker303: "Oh yes, I was not the only one who hated Figure Skating. But everything else is top! The graphics are very appealing, I always felt like winter holidays :-), I was especially taken by Biathlon. The nice idea with the heartbeat when being exhausted, when you were at the shooting stand, the design of the landscape... I loved it! Everything can be controlled and played well (exception: Figure Skating). All in all WG is a must, for the C64 fan."

Quapil: "THE multiplayer game of its time, at least in my circle of friends...and of course without Figure Skating ;) I like playing it today from time to time. But it is most fun when played with the original hardware. From me 9/10 and the hint, that the Games Originals by Epyx load unbelievably fast, no idea how Epyx could have programmed such a fast fastloader so early."

Shmendric: "Fast fastloader? I hated the game due to the permanent loading. But the graphics and fun factor are without doubt top."

MontyMole: "The Figure Skating disciplines bring down the overall impression a bit. Fortunately, you can also leave them out in the tournaments. Through this, the game gets a bit too short. But I like it better than Summer Games. The controls are in the meantime significantly easier to learn. Winter Games is next to California Games my favourite of the series." 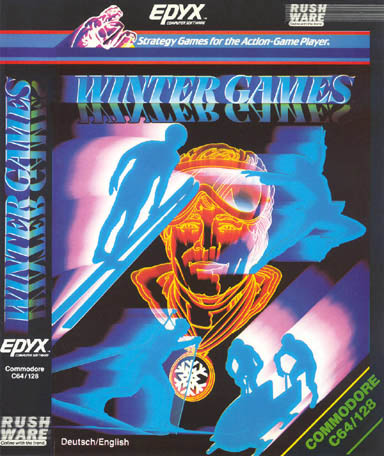 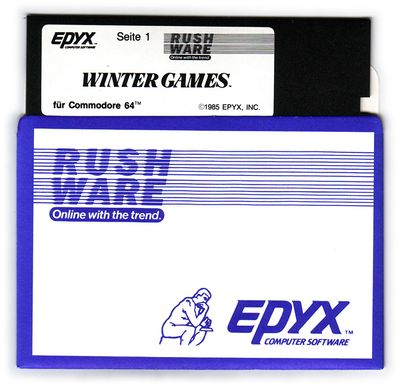 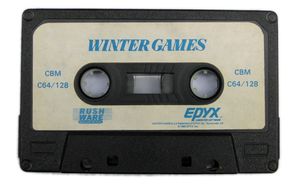 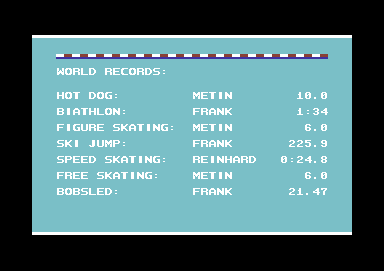