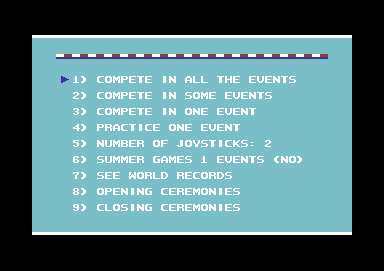 Summer Games II is the sequel of Summer Games. Epyx has now introduced the events, which have been missed at Summer Games. Both games together now get a proper collection of sports, which you can play above all as party competition. In other sports games it was common to shake the joystick until it breaks. At Summer Games II the controls are better thought through and the joystick is only really strained in the discipline "Cycling".

The game is laid out for up to 8 players. The players get points for their reached ranks in each of the disciplines. For each gold medal you get 5 points, for each silver medal 3 points and one point for each bronze medal. The player with the most points wins the game.

An important alteration against the forerunner version is the menu point "compete in some events". With this it is possible to exclude unloved events. Furthermore, this sports game was expanded by a closing ceremony.

Epyx has again taken great pains in graphics to offer an optically attractive game. Many elements, that they could have taken over from Summer Games were newly designed. The animation of the characters are realized very appealingly.

At Triple Jump you need to do 3 jumps which should be as long as possible. This is not quite easy, as this needs fast, coordinated joystick movements. The judges declare the jump as faulty if a mistake is made. Four movements of the joystick are needed for this event.

At Rowing you need the move the joystick steadily horizontally, to reach a fast and fluent movement. Hectic joystick movements only seldom make high speeds. The player who first has overcome the distance of 250 meters has won.

At Javelin Throw you need to throw the spear as far as possible. When the player runs you can speed him up by pressing continuously on the fire button. Just before the line you should draw the joystick to the left until the spear is in the right throwing position. By the combination of speed and throwing angle will be decided how far the spear flies.

At Equestrian you need to jump over obstacles. Hereby you should take care that you don’t ride too fast. You accelerate the horse by pulling the stick upwards If the horse is too fast, the horse will throw the rider down after landing. If the rider misses the correct jumping point the horse will refuse to jump. After that the joystick needs to be moved downwards to turn the horse. A movement forwards continues to run. Therefore skilled timing while jumping is needed. After 100 seconds or when having more than 99 penalty points the rider is disqualified.

At High Jump you need to jump over a crossbar. With a movement to the right the racer starts. A fast startup and a precise timing in the jumping phase are need for High Jump. Only with enough training you can make this event.

At Cycling a distance of 200 meters needs to be covered as fast as possible. This is not reached by shaking, but by ringlike clockwise movements with the joystick. The direction is shown by a rotating arrow (pedal position).

At Kayaking you need to drive through 15 gates the right way. However, the kayak is hard to steer and some gates are positioned in a way that the whole thing gets an ordeal. Most of the gates need to be taken forwards in flow direction, while two gates (6 and 13) need to be driven through backwards. Gates that you have missed lead to penalty time. This times is added to the time you needed to complete the course. The winner of this discipline is the player with the lowest time. 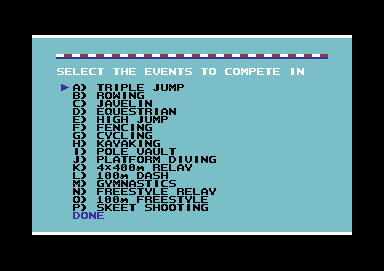 However, not all versions work together with each other without problems. To avoid getting an unpleasant crash during the game, you can find here a set of versions which are ompatible to each other (according to "Flexman", not tested "H.T.W"). (but see also section "Problems with the combination of Summer Games and Summer Games II").

only 1 disk side (space-saving)

annoying turning of the disk falls away

world records can be saved optionally

no combination with Summer Games possible

no turbo loader (advantage for emulator, furthermore you can speed up with cartridge) 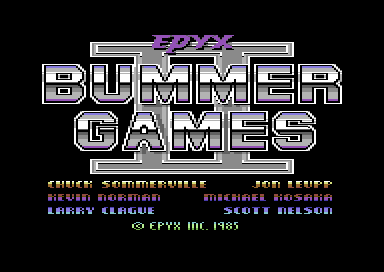 Werner: "A really great and mature sports game, that eclipses his forerunner! 10 points from me."

FXXS: "Rowing, Javelin Throw, Equestrian, and High Jump are good to learn and motivate to break the record. This also counts restrictedly for Kayaking, only the controls should have been a bit more exact and the kayak a bit shorter. Fencing is quite ok, unfortunately there is no real record. I didn’t like Cycling at all, nevertheless still good 9 points. (together with part 1 a 10+)"

mombasajoe: "Many improvements to the forerunner. This part would be the best without Fencing and Equestrian,in exchange with 100m Dash and Platform Diving in the same quality. Doesn’t exist this way. Bummer! Anyway 8/10."

Shakermaker303: "Not better or worse than part 1. Therefore again 9 points from me."

blubarju: "My sister and I especially liked Equestrian. But the other disciplines are of course also of high quality. As you are used to from Epyx. 9 out of 10 points."

MontyMole: "By far better than the in my opinion badly aged forerunner. The controls are still rather challenging, but much more approachable as in the first part, where I often didn’t understand, what depends on what. It is also nice that there are no gap fillers such as 4x400m Relay or two swimming disciplines. I give Summer Games 2 close 9 points. And only because the later parts of the series (California Games, Winter Games) were just another tick better." 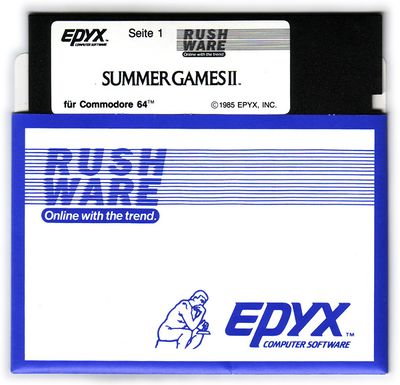 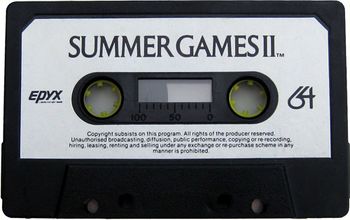 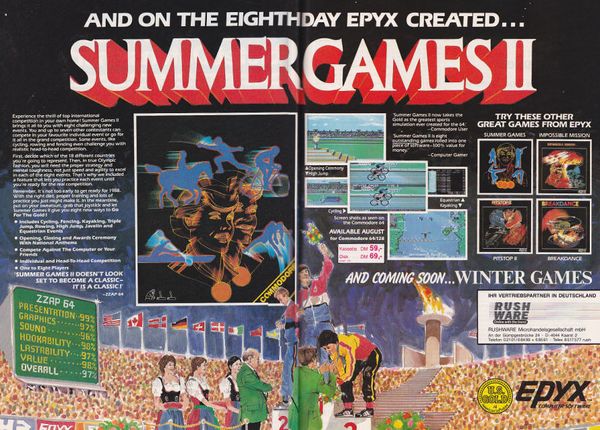 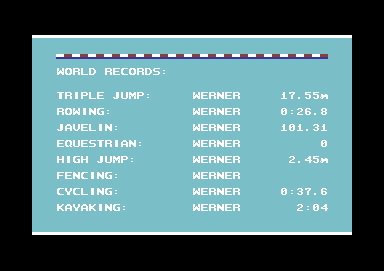