The Amstrad CPC (Colour Personal Computer) series was a series of 8-bit home computers that were manufactured by the British company Amstrad between 1984 (launch of the CPC464: 21st June 1984) and 1993 (?). The CPC, like most contemporary home micros, had an integrated computer-in-a-keyboard design. Also incorporated in the keyboard was the tape recorder or disc drive.

In general what Amstrad aimed for was to offer a completely integrated solution at a low price. Just as with Amstrad's stereo towers before, Alan M. Sugar wanted to provide a solution with as few separate components as possible, with as few cables as possible and at as low a price as possible. A truck driver, unfamiliar with computers, was often cited as the CPC's target market.

As a result, Amstrad chose ready off-the-shelf components and used low-cost production methods in an effort to bring manufacturing costs down. They also included a monitor to connect the computer to - a move which, while raising the price, was designed to free the home TV from little brats hogging it for a dose of Ikari Warriors while Eastenders was on. This concept appealed to users and proved to be a success.

The combination of low cost, integrated design, good manufacturing quality and some impressive features like CP/M and an 80-column display mode (lacking in much of the competition, particularly the Sinclair ZX Spectrum and Commodore 64) proved to be a success both with home users and small businesses, and Amstrad went on to sell millions of CPCs.

Because of its use of the Z80, which was also used in the Sinclair models, some of the earliest games found on the CPC were fairly direct ports of the Spectrum versions which failed to take advantage of the CPC's extra capabilities. The amount of Spectrum ports has often been overstated by those who wish to knock the machine, and in fact formed a comparatively small number of largely unsuccessful games. Nonetheless, those that were published left users and reviewers with a bad taste in their mouth.

At its core, the CPC combined a standard 4MHz Z80A with off-the-shelf components and a custom Gate Array chip. The firmware comprised two 16k ROMs (combined onto one 32k chip): one was effectively the operating system, the other the fast and flexible Locomotive BASIC interpreter. All machines except the original 464 would also include a further 16k ROM (on a separate chip), the AMSDOS disc operating system. 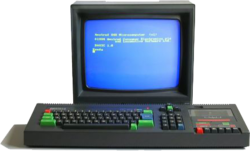 First came the CPC464, the father of the CPC family, released on the 21st June 1984(with production ceasing in 1990). This model used an integrated tape recorder and offered 64KB of RAM. It sold around two million units in Europe and, technologically-wise, was more impressive than the ZX Spectrum and on a similar level with the Commodore 64. (One notable exception was the sound chip; while the C64 employed the splendid custom SID chip, Amstrad opted for a generic sound chip - AY-3-8912 - with unremarkable features. That said, the firmware of the CPC was leagues ahead of the C64.) At its core was a Z80 clocked at 4MHz - though screen display considerations, and the particular design of the Gate Array limited this to an effective 3.3MHz in practice - while the display was managed by the 6845 CRTC along with a gate-array chip.

The CPC 472 was a Spanish version of the CPC 464 with an additional, non-functional 8KB RAM. A Spanish law required that every computer with up to 64KB should have extra keys for the Spanish language, or an extra tax would be levied. So Amstrad soldered in an extra 8kb which was not, however, usable by the machine since it was not connected to anything else. Later on Amstrad released a 472 with a proper Spanish keyboard. After the rule changed there was also a CPC472 with non-Spanish keys available for a very short time. The CPC 472 is very rare.

In June 1985, Amstrad took the initial design and, building upon the same idea, removed the tape recorder and replaced it with a disc drive, using the same hardware sold as the DDI-1 add-on for 464 owners. The result: the CPC664. Sporting a less colourful and easier-to-type-on keyboard, the CPC664 appealed as a more serious machine and proved a success, especially due to its quite fast 3", 180KB/side drive.

Shortly afterwards, Amstrad launched the CPC6128 for the American market only, through its distributor Indescomp. The new machine sported 128k of memory and a still more sober appearance, but was otherwise identical to the 664.

Despite initial denials, the machine was launched in Europe shortly afterwards, replacing the 664 for the same price - a situation which understandably irritated some of those who had recently purchased 664s. As well as the CP/M 2.2 and DR Logo that had shipped with the DDI-1 and the CPC664, the 6128 came bundled with CP/M Plus (with the GSX graphics extension) making it an appealing all-round computer at a low price. Though the 128KB of memory could not be accessed all at once from BASIC (due to limitations of the Z80), the upper 64KB could be used readily from machine code courtesy of an upgrade Gate Array. A bundled program, Bankman, provided some access from BASIC.

The presence of this extra memory and the clever design of Amstrad's CP/M Plus implementation allowed for a TPA (Transient Program Area) of 42KB, more than enough to run all CP/M software.

At the same time, Amstrad was designing the immensely successful PCW word-processor series, also with software by Locomotive Software and featuring an all-in-one Z80-based design.

A shared architecture was developed that would encompass both the PCW and a new, upgraded CPC - codenamed ANT, or Arnold Number Two. It shared many features with the PCW, such as its larger memory and its exceptionally elegant screen-handling hardware, but boasted colour and sound, and retained CPC compatibility. The aim was to see off the Atari ST and Commodore Amiga, next-generation games machines already on the horizon.

A few of the PCW's design features which don't appear to make any sense on their own stem from this shared ancestry. But the project was dropped at a fairly early stage, and the CPC Classic lived on before eventually succumbing to the Plus. Only one prototype board is believed to survive, in the possession of ex-Locomotive Software engineer Richard Clayton.

The Plus series[edit | edit source] 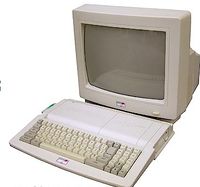 The last models in the Amstrad CPC range were the Amstrad 464 Plus and Amstrad 6128 Plus, launched together in 1990. The CPC name is said to have been dropped because of a legal dispute with a French firm, though it is also likely that "CPC 6128 Plus" was considered too unwieldy a name and one redolent of the machine's mid-80s heritage.

Described as a solution of 'too little, too late', this was Amstrad's second effort to prolong the life of its 8-bit computer series in the face of fierce competition from new 16-bit machines (notably, the Atari ST and the Commodore Amiga). The Plus series were mostly (but not quite 100%) compatible with the original CPC computers, and incorporated a list of new features, like a cartridge port for instant program loading, DMA for the AY soundchip, hardware scrolling, programmable interrupts, 16 hardware zoomable sprites (not vectorized) with an independent palette of 15 colours, and a choice of 4096 colours all in a new, sleek case which mimicked the keyboard-computer design that was en vogue in the 16-bit market (ST, Amiga etc). While the Amstrad Plus computers were arguably one of the best 8-bit computers ever built for the mass market, they died an early death as the 16-bit era had well and truly begun. 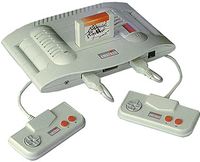 By 1990 Amstrad had realised that the home market was heading towards the 16-bit machines, on one hand, and towards the new generation of game consoles like the Sega Master System or the Nintendo Entertainment System, on the other. Therefore, just as they created the 464 Plus and 6128 Plus to compete against the ST and the Amiga, they also created a stripped-down variant called the GX4000. The GX4000 was, in essence, a Plus motherboard in a new case, with no keyboard, cassette deck or disc drive, and with most extension ports gone - save for the cartridge port and two joypads.

As expected, the GX4000 was a flop that could not break the stranglehold that Sega and Nintendo had on the market at the time. As a result, the GX4000 was soon to be found selling at ridiculously low prices - as little as £19.99 in the UK - as dealers tried to offload their stock. It was a shame, because if Amstrad had realised the market potential and produced this console a few years earlier, it could well have been a success. As it was, it had to suffer the same fate as the even less powerful Commodore 64GS.

All in all, the CPC series met with great success. Although they would never achieve the universal status of the Commodore 64 or the humble Spectrum series, the CPCs managed to sell very well and attain leader status in several countries. The CPCs were very popular in the UK, Spain, France, Greece, Germany and Australia, to name a few countries.

Besides a lot of emulators, several old and modern hardware clones have been produced up to now.