International Karate simulates a Karate competition in which 2 fighters compete against each other in every round. During the single player mode a fight lasts 30 seconds. For each hit you either get half a point or a full point. The one who has 2 points first when the time has run out wins. If you get half a point or one point is decided by the referee. If you lose once, the tournament is over and you enter the highscore with your number of points and the belt colour you have reached (which rises during the course of the game). During the 2 player mode a fight lasts 60 seconds. And there are 12 points. If a player hits, he will be rewarded a point, the opponent will lose a point. If a player has all 12 points or the most points when the time is over, he will win the fight. If he wins 2 fights, he wins the whole game. Between the fights there are now and then mini games with different skill or reaction tasks in both modes.

The two fighters stand in front of a picturesque background. They are wonderfully animated and the background offers a nice diversion with some known scenes. Some place behind the fighters you can see the referee which comments through small speech bubbles. The digitalized fighting screams of the opponents are probably cult.

The controls are rather comprehensive. With the joystick you can release different activities, depending on what direction you press it into (right for going right, right and up for a high hit etc.). Furthermore there are other activities where you need to keep the fire button pressed. During an attack movement you need to keep the joystick pressed into the corresponding direction until the fighter has ended the move. If you then choose another movement with the joystick quickly, and more, the fighter will conduct a constant series of the chosen attack / defence movements without a pause. In the mini games the controls differ, too. For example, for striking through tiles with the head you need to do a quick left-right movement as soon as the referee says "Go!". In another game you need to avoid items by pressing the joystick up and down.

Block
It is possible to block breast and head kicks / strokes of the opponent by backing away. Hits from a small distance are after that blocked for this attack. But beware: kicks on the shinbone and foot sweep are excluded from that. The only possibility to protect yourself against them is to get out of the opponent's reach.

Mini game 1
As soon as this game starts you see your fighter standing in front of a pile of 10 tiles. The referee will now give the start signal ("Ready") and then "Go" will be shown. Now you need to jolt the joystick left and right as fast as possible, so the fighter tries to break through the pile with his head. For each tile that is broken, you get 100 points and if all of them are broken, 2.000 points will be given additionally.

Mini game 2
In this reaction test you need avoid a (consistent, i.e. not random) sequence of thrown swords, spears and throwing stars. As soon as you are touched, the test will be ended. The bonus is 100 points per avoided weapon. If you make the whole sequence, you get added additionally 2.000 points to your score.

Keys in the game[edit | edit source]

Press the following key combinations in the game:

Dante:"International Karate is a super game. Although it gets partially very difficult, you can enjoy the great drawn figures, which fight the cool fights with nice animations. Escepially the 2 player mode is great fun. The game gets the full 10 points from me (or in this case 10 full points)."

mombasajoe:"Nice technique, nice music, smooth and quick game flow, which allows considerate actions as well as quick reaction. Teh quality of the backgrounds is unfortunately rather inconsistent. Some are great, others appear loveless. 9/10."

Shakermaker303: "Cult game. The sounds and the music are just ingenious. Playability, diversity of the movements (kicks and blows) and the good graphics (especially the background locations) bring me to give 10 out of 10 points."

Shmendric: "This was the first computer game I ever saw running on a Commodore 64. And it's one of my all-time favorites, even though only the two-player mode is attractive for me today. Why the referee sometimes gives full and sometimes half points, i've never really understood. Technically really an accurate beat 'em up with a few different attacking techniques to master - With only one move you will not get too far in this game. Why there are a lot more kicks than punches in a karate game, is still a mystery to me. "

Since 28.03.2008 the game is available for Nintendo Wii Virtual Console as download.

The game was also sold on 5.25" diskette. On one side was the C64 version, on the other side was a version for the Atari 8-bit range.

On the 5th December 2017, to celebrate the 30th Anniversary; International Karate Ultimate was released on EasyFlash. 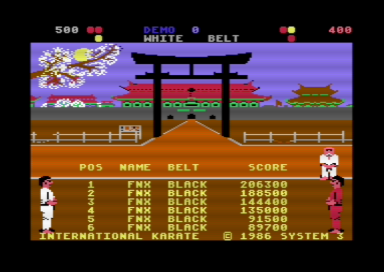