In Paradroid you have to clean a ship fleet from hostile robots. For this you control an influence device of the series (001), which can connect to other robots, to control them after a successful takeover. This is really necessary as the (001) series is only equipped with a weak laser and a low protection shield. Unfortunately, the circuits of each "host robot" get damaged by the external control, the higher developed the robot, the bigger is the damage. The task of the player is to eliminate the hostile robots on 16 decks per ship, either by taking them over or by the use of a weapon. There are altogether 24 robot types in 10 classes.

Screenshots of the complete briefing

The gameplay itself on the individual decks is displayed from the birds view with a mobile and fast scrolling. Additionally there are static information screens and transfer sequences.

The sound is largely limited to coherent effects.

In the static screens choose with the corresponding direction and confirm by pressing fire.

At the start of the transfer you can choose which side of the controls you want to have (left is yellow, right is purple), thereby you should look for continuous conducts, recolouring mechanisms and repeaters. Furthermore there are conducts, which reach several fields by y junctions with one energy capsule or need several energy capsules for activation due to the joining of conducts.

After the time has run out or confirming by pressing fire the actual transfer takes place. The aim is to have more than 6 fields in your own colour at the end of the process. If a draw is reached (both have 6 fields), then the transfer is repeated with a new circuit diagram. If you have less than 6 fields, the hostile robot overcharges the influence unit and the previous host gets lost. If there was no host robot before the transfer, the 001-device explodes and the game is over. The higher the serial number, the more energy capsules has the corresponding robot and the energy capsules only last for a limited time, unless a circuit with a repeater was activated. When both sides try to activate the same field, it will -at the end of the transfer- have the colour which was activated at a later point or the one with a repeater in the circuit.

The colours of the robot classes correspond the ones of the description on longplayer.de

Deck 1, 2, 13 and 14 contain several divided sections. They count as done (get grey), when 'all sections of the deck are free of robots.

On some decks there are several lifts. The ones, which are further left on the map, are on the deck further in the west.

First train the transfer of smaller robots on decks 4-6 and memorise the position of the lifts on these decks. Then you can go on with decks 7, 9 and 10, to get to the points in a rather secure way.

Load the game as usual by Load"*",8 then enter the following poke: Poke 8410,0 and start with run. From now on you will win every transfer easily.

Pascal Ciampi: "Another game which is so fantastic, that the graphic gets a minor matter. The idea of the game alone is brilliant. The implementation is impressively clear and simple.

Worf 22:20, 16. Sep 2005 (CEST): "I have a different view. I was fascinated particularly by the graphics and the nice shades. When the last robot of a deck was eliminated or taken over, the sound of electro motors shutting down slowly, the light goes out, only some functional lamps still glare like LEDs in the dark. The colours of the design change from time to time, everything in nice harmonised colours. The idea of the game is also very good. This is altogether a good game!"

Borna: You should not disregard the fantastic droid graphics, let alone the excellent game principle. A consens classic, which every C64 user should have known and which is fully justifiable at the top of the charts. Outstanding!

Equinoxe: "How many hours I have spent with this game! Functional graphics with a brilliant game principle. I played through the aisles night after night. It was only a bit deflating when I first made it to clean the first ship and the game continued on an identical second ship. Unfortunately, I never made it to clean all the ships, although by and by you are practically able (with a bit of luck) to take over every robot without a problem (what a feeling when you took over an 883 with your already flashing and shot-down 001-unit). I almost solely steered with the fire button pressed in permanent take-over mode through the game ... which was sometimes a bit annoying, when you ran into the wrong robot in the levels, where next to the 700s and 800s also 200s were running around. 10 points from me."

Davidhearnewriter: "Paradroid has been Andrew Braybrook's finest hour to date, with sublime design and execution. As you scoot around the decks taking over robots and blasting them, the action broken up nicely by the transfer game, a good time is guaranteed. That was true when this game came out in 1985 and it's still as true in 2021. Nothing brings me back to the C64 like this game. It has it all - the controls are still so clever - you can move in one direction and shoot in another. All with a joystick and one fire button. I could never clear all the decks, this game defeated me but who knows, maybe I'll finish it one day. The graphics are still slick, the sounds perfect for the game and that design, where you're in one skirmish after another (wait until you meet a 711 for the first time - and better yet, cause carnage when you control one) remains timeless. A team of a dozen people would struggle to execute something this well. The fact it was done by one person defies belief - it really does. 97%"

For all Paradroid fans, who like a faster and more fluent gameplay, there is the PARADROID REDUX version by TNT/Beyond Force, a brushed up version of the classic. 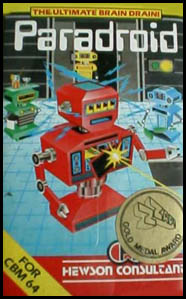