Attention! Attention! Urgent message to Special Agent 4125. Elvin Atombender has returned! It is only two years ago now that Elvin Atombender was defeated in Impossible Mission. Now Elvin came to new powers again. According to our reports, he has settled down in his new headquarter, a fortress with eight watch towers. As far as we are informed, he is planning again, protected by guards, robots, mines and trapdoors. Only one person in the world knows how to find the code numbers, keys, helpful objects and how to master the labyrinth of moving stairs and elevators. So we turn to you , Special Agent 4125, and ask you for your help. Your mission starts now. Good luck and return safely...

Keep Dr. Elvin Atombender from destroying the world by breaking into the building complex and breaking his computer codes. You have eight hours for this job.

The game is - concerning the graphics, sound and controls - mostly the same as its forerunner, but new elements were inserted as further robot types and the game area was expanded and divided into 8 towers with each 4-6 rooms and the central tower with the control room.

switch off the lifts,
switch off the robots,
move on the floor platforms to the left and right,
switch in the light in a dark room
arm with a time bomb. (It needs to be placed in front of a safe or when using a mine. Press the stick down to crouch down and press the fire button to lay down the bomb or the mine.)

You can stand into the robots (walk or jump through) when they have been suspended. It only gets really annoying when they suddenly wake up...

Robotron2084:"Well, I don't quite know...the game doesn't quite put me on fire. The graphics in the rooms is a bit fuzzier than in IM1 and this permanent pink/cyan/azure mix rather hurts the eye after a while. The sound is almost identical to the forerunner's, even some samples were recycled...virtually embarrassing! The gameplay has been expanded by a few - as I think - not worldshaking details and as the game is divided in sections this time, I personally feel kind of cramped. IM2 is certainly a good game, but leaves me somehow slightly helpless and unconcerned. Maybe I just have to play it a few times, until it makes "Click!". I'd give 7 out of 10 points."

Flexman:"For me, the game was at that time even better than the first very good part, as it was much clearer what to do without a manual. In addition, the difficulty grad is not as high as in Impossible Mission I and with the mines and bombs you have more and more creative possibilities to switch off the robots. Furthermore, now there is the possibility to save the game status. I liked the graphics from the first part, but this is also okay; the title music is also very good (but designed for the old SID 6581), the end sequence also satisfied me at that time. Therefore, I give here - as for the first part - 10 out of 10 points."

Only the Commodore 64 disk version saves highscore tables on to diskette. This feature is not available in the cassette version. 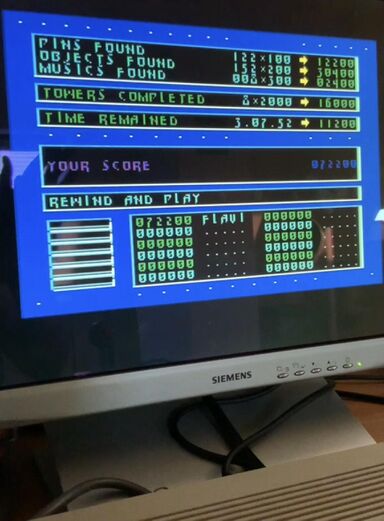