Trailblazer is a "futuristic" arcade racing game, where you "roll" throught the different courses as fast as possible. The ball is controlled directly by joystick. Joystick forward speeds up, joystick backwards slows down. With the fire button one can jump independently from the field colours, the distance reached depends on the speed. After every third course there is a bonus level, where you have to jump a given combination of fields.

The screen is split in two, the track scrolls as isometric "chess board" towards the player, different field colours have different effects, the background is a black "space" with twinkling starts.

in the options menu

only possible with track selections signs to choose the tracks.

The desired game mode is chosen by joystick right/left, the level selection (letters) by joystick up/down.

1 Player Arcade
You are given only 7 jumps at the beginning of each track (display at the upper right). This amount is added to the remaining number of jumps from the previous level up to the maximum of 9 jumps. You play until you fail to run a track within the given time. The time that you do not need for one track, is added to the time in the next track. You start with track A, then track B and so on. Every three courses there is a bonus game. The aim is to get through all levels before the time is over.

1 Player Trial
For practice. The track can be chosen by the first letter of the track selections sign.

2 Player Match
You can select three tracks with the three letters of the track selection sign. The times of the three tracks of each player are added at the end. The player with less time for all tracks wins. You have an unlimited number of jumps.

Player VS CPU Match
Race against computer with the same rules as 2 Player Match. Computer is a competent but not flawless opponent and paying attention to the actions of CPU controlled ball can give some useful hints for developing better strategies against individual levels and sections.

You see a field with the size of 5 x 3 squares and behind that the ball. After pressing the fire button the ball jumps onto a few squares. Remember these squares, as you have to jump the same squares with the ball now. For each movement of the ball you need one joystick movement. Place the ball on the square of which you think was the first one where the ball was placed in the sequence shown before and press the fire button. Then place it on the second square and press the fire button and so on. You need to do this until all squares have been jumped in the correct order. But watch the time limit. 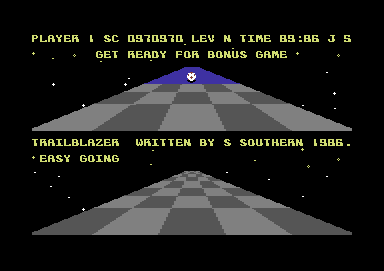 FXXS: "One of the "raciest" games for the C64, the speed that you "feel" is higher than with the most normal racing games. There are only a few unfair spots in the game and even those can be mastered perfectly with luck and skill. Only the bonus level and the "broken" end disturb the overall picture, therefore 9 out of 10 points."

TheRyk: "Trailblazer is a nice combination of a skill game and racing/jumping action. Moving a ball through a space course instead of driving a fuel-guzzling car over dusty asphalt streets is a welcome diversion to my mind. Though the graphics and music can be regarded as somewhere between functionally simple and quite okay, all in all, it is a very good game providing lots of fun (with a bit of patience which you need to get a feeling for the ball). 7 of 10."

Shakermaker303: "With two players always quite fun. Especially funny, if you raced in the two-player mode on about the same height, this confused both players to the same extent on the split-screen, as both balls look the same. Definitely acceptable, therefore 8 out of 10 points."

Other systems: The original version of Trailblazer was developed for C16 by Shaun Southern, who used it as basis for enhanced C64 conversion. This version for C16 and Plus/4 lacked split-screen and bonus levels. On other systems there is no apparent 1:1 conversion. The CPC version has different design of the fields, the ST and ZX Spectrum versions seem to have different levels. The available game modes also vary depending on the version. Of the official versions the conversion for Atari's 8-bit computer family may be closest to the C64 version. The unofficial freeware version for Amiga was created by Vision Beyond. This version is also quite faithful to the C64 version, although it lacks the bonus levels and loops back to the beginning after the final level as opposed to ending the game. 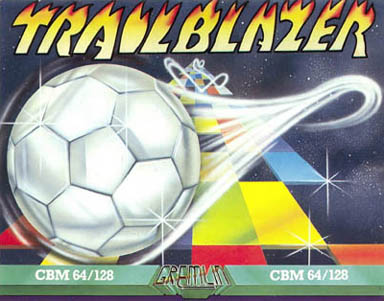 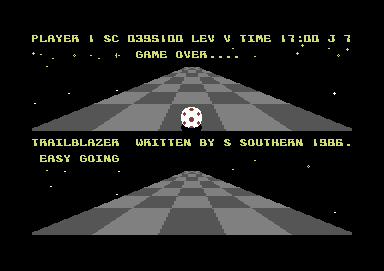