Monty Mole (also: Wanted! Monty Mole) is a jump'n'run game of the most difficult kind, that needed approx. 3 months of development.

Starting in the garden, everything is full of perils. We collect pieces of coal and flee from evil boiled sweets, scurry under stampers at the right moment. Touching all the evil things quickly subtracts you energy. When all the energy is lost, the game ends. A "box of worms" fills up the used energy. Glittering protective shields give you a respite.

You can climb on ropes and trees. The numbers show into which direction you need to climb. Sometimes you also have to move levers. This happens automatically when passing them. You also need to take care of the floor dynamics, they occasionally disappear...

A tin bucket and collecting pieces of coal each give you one point for the highscore, whereby there is a maximum of 13 points per level. When the energy is empty, then a R.I.P. appears before the options menu is shown again.

Nice graphics for that time. Written hints are built into the graphics.

With the key F1  you can choose the difficulty grade EASY or HARD in the title screen. The game is started with the key Space .

This split map shows an overview of the game

After loading the game and a reset you can enter the following:

Worf: "The game is good but difficult. I loved it. However, I ask myself today how I could have played THIS game until section 8, without emulator, without savegames. Well, then someday Monty on the Run was released and really everybody was crazy about that!"

Jodigi: "An interesting game, that keeps you occupied for a long time..."

FXXS: "I think the music is only bearable on the long run with a bitter... I also personally find it too confusing that I would want to play it for a longer time. 7 points'"

If you try to start Monty Mole with the x64.exe of Vice, you will get bad graphic bugs. Simply start with the x64sc.exe, which emulates the C64 more precisely, then it will run without problems.

DerSchmu shows all he can in the field of jump & runs in this longplay... 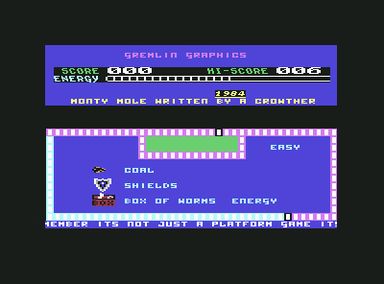