Auf Wiedersehen Monty is a 1987 multi-screen platformer from Gremlin Graphics. It is the third episode in the four-part Monty series about an outlaw mole.

The player must guide Monty through about half of Europe (back then, the communist’s iron curtain remained closed, even to moles). He needs enough money to buy the secluded island of Montos (which lies between Lesbos, Mentos, and Domestos), where he will finally be able to retire in peace. But a ritzy place like Montos doesn’t come cheap, and Monty must collect 180 traveller’s cheques scattered around Europe and an assortment of valuables that he can convert into cash. His travels lead him from Gibraltar through about a hundred locations, including Spain, France, Germany... and even fantasy countries, such as Moledavia. To speed up his travels, Monty can fly out from various airports. First, he must collect enough plane tickets. As he can only carry four valuables or tickets at a time (damn balloon pants!) he must carefully plan out his route. A graphic in the lower part of the screen tracks Monty’s progress – the more money he collects, the more he sees of his longed-for paradise island. Hampering the kleptomaniac mole’s progress are various wacky enemies that he must face to get the loot. After bagging 18,000 in cash, Monty can finally jet off to the good life.

Like Monty on the Run, Gremlin dished up familiar Spectrum-style graphics, meaning mostly hi-res on a black background. But considering that two years passed between the two games, the graphics improved disappointingly little:

Rob Hubbard visited Gremlin Graphics for two days to collaborate with Ben Daglish on the title theme. Together, they created a dramatic six-minute tune with wailing SID-guitar. Hubbard also knocked out a dozen national anthems, which play whenever Monty crosses a country border. He obviously had fun doing it: When Monty arrives in Sweden, the Muppet Show chef’s "Smørrebrød" song blares out. In the Netherlands, the famous "Tulips from Amsterdam" plays but comically chokes off. (To hear these anthems, first turn off the music at the title screen.)

Map of the game and the routes[edit | edit source]

These special plaftorms and walls can appear in different colours and slightly changed appearance.

After collecting all the items, Monty leaves Greece at the lower right of the map, leaping to freedom through the left screen border. In the final scene, we see our hero finally getting to relax on Montos with a bikini-clad hottie, knocking back the cocktails and enjoying a well-earned retirement.

Finally done...about time to get drunk!

The version by Lucid & Tricycle has trainer options and an subsequently built-in highscore saver.

Robotron2084: "I like Auf Wiedersehen Monty much better than the forerunner, because it is not so brutely linearly designed and the flying sequences mix up the game again and again. Also the music is in my opinion much more catchy than the nervous track in MotR, although I always switch it off to hear Hubbards sometims hilarious "national anthems". "O Tannenbaum" as recognizing melody for the Eastern Bloc, awesome! I also liked much better that you did not have to put together a silly Survival Kit without which you at some point in the game were not able to proceed, and this impression of the game stayed until today. The topic of a journey through Europe and the many cute country-specific details and sprites that fill the screen give the game a significantly more causual note. AWM is of course sometimes as unfair as MotR, which is on the main part caused by the still existing "crushers" in the game, which are unpredictable and which you need to avoid if you do not plan to play the game to the end, but there is nobody that crazy (or is there?). For all I care there could have been a further sequel in this style, but there wasn't, because for "Impossamole" were other paths chosen concerning the design. Together with Wizard and Impossible Mission is AWM at the very top of my top list of platformers and I give 8 out of 10 points."

pj64: If you bought a Commodore Plus/4 back in the day, this was probably the best platformer you could hope for! But for my money, “Monty on the Run” is the best of the Monty series.

Enclosed to the game was a button which you could stick amongst others to the Lacoste polo shirt, to the ear or to the hat (or where the sun does not shine), to set a new course.

As the C64 version of the game - in contrast to the versions for ZX Spectrum and Amstrad CPC - did originally not contain a loading screen, DATA-LAND retrospectively created one for the game in February 2010.

The HiRes graphic is a direct port of the loadings screen in the ZX Spectrum version. Unfortunately, there is no version of the game where the graphic was integrated. 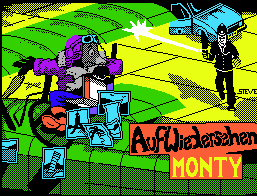 Longplay through the game, but with sprite cheat...boo! 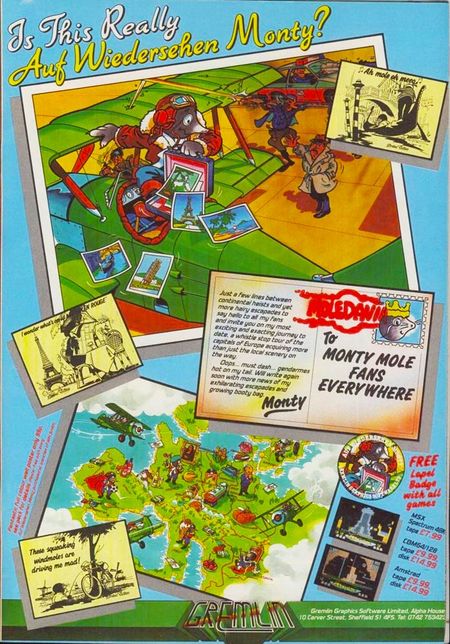 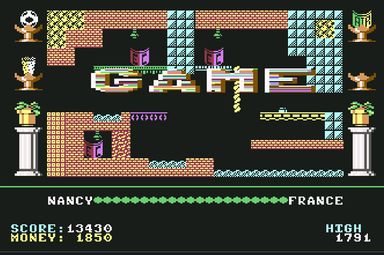