While prospecting, Miner Willy stumbles on an old, long forgotten mineshaft. On further exploration, he finds evidence of a superior lost civilization. These ancients used robots to dig deep into the Earth's core to supply the essential raw materials for their advanced industry. Centuries of peace and prosperity passed, until one day the civilization tore itself apart thorough war. It lapsed into a long dark age, abandoning its industry and machines. Nobody, however, thought to tell the mine robots to stop working. Through countless ages they had steadily collected a huge stockpile of valuable metals and minerals.

Miner Willy realizes that he now can make his fortune by finding the underground store. To move to the next chamber, you must collect all the flashing keys while avoiding nasties like POISONOUS PANSIES and SPIDERS and worst of all, MANIC MINING ROBOTS. However, if you fall heavily three times the game will end. After collecting all the keys, you can enter the flashing portal to escape the mine.

Manic Miner is an early game from the C64’s earliest days. The levels lack variety but have a good buildup. Willy and the guardians animate smoothly. But the simple sound eventually gets monotonous.

Or use the joystick in port#2

additionally in the crack by Remember

←  = abort game and back to menu
RUN/STOP  = restart current level

H.T.W: "This veteran of the platform games is simple but nevertheless ingenious. You see in the graphics that the ZX Spectrum was the inspiration for it, but the animation of the sprites is fluent. The levels are built up well-thought-out and get harder during the game. You need pixel exact jumping and this also with the pressure of time. A nice game from the starting time of the C64."

Robotron2084: "Manic Miner, that is borderline graphics, which is dishonourable to the C64, annoying background music in permanent loop and an inhuman difficulty grade. Hard stuff for true platform fanatics, who seek a real challenge after Jumpman. For me personally Manic Miner is simply too stressful. 5 out of 10 points."

pj64: With its kooky plot and surreal cast of characters it caused a stir when Bug-Byte released it for the little old ZX Spectrum back in 1983. It's great to see such a faithful port. However, like other Speccy games, it did not capitalize on the C64’s better graphics and sound and probably won’t impress C64’ers.

There is a cc65 remake by Stefan Wessels available. 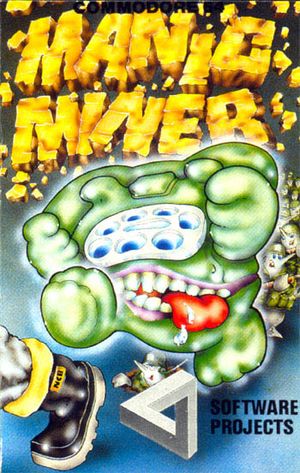 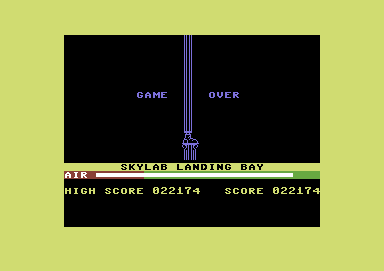