Alien creatures have broken into the Jupiter headquarters and sabotaged all systems and hid bombs in different corners and angles, which can destroy the headquarters and the two adjoining buildings any moment. It all depends on you. As secret agent Jupiter Jumpman you have the speed and experience to cross the aliens' plans and thus defend the headquarters.
In this comprehensive platform game, the bombs have to be collected in 30 levels. At the same time some creatures as bats, birds or aliens, but also robots and missiles disturb you. Also, collecting the bombs is a bit tricky. Either traps are triggered, i.e. ropes, ladders or platform parts disappear or fall down, or in some levels they only appear by this. The name of the level kind of contains directly what will happen! Seen as that, everything that moves should be avoided.
Usually this platform game is played by jumping, but in some few levels alien creatures need to be shot. Jumpman was rather successful in 1983, so that there was a follower game Jumpman Junior in 1984.

The levels are designed rather simply, i.e. most participants are unicoloured but the level altogether is multicoloured. Creatures, especially Jumpman, are animated. Simple souund effects as the jumping and running of Jumpman, movement of creatures, the missiles or bombs accompany the game. A short tune is played when you lose a life, at the end of a level and at the end of the game.

There are 5 game variants:

After completing the game variants 1-3 the Jupiter headquarter appears.

Jumpman's speed is preset for each level and can be seen next to SPEED. But it can be changed by pressing the keys <1> to <8> before the Jumpan appears in the level: 1 is the fastest and 8 the slowest speed.

Each collected bomb gets you 100 points, except for the level "Grand Puzzle" (here: 500 points per bomb). Shooting creatures also gets you points (not in all levels possible!).

In the game there are 2 types of ropes which Jumpman automatically climbs up or down. You can also jump from or onto the ropes!

Caution: Jumpman's speed also effects the speed of the creatures.

Jodigi: "A nice game. One might think that entering and leaving the ladders is a bit problematic. But maybe this is intended so."

Worf: "A really bad game! Only the great number of levels can be mentioned positively. A real B-game."

TheRyk: "Okay, an early game. But compared to Lode Runner which is from 1983 as well, Jumpman is really poor. Being stuck in ladders again and again is really annoying. Apart from mere nostalgic reasons, nobody needs that. 3 out of 10 points."

Robotron2084: "Jumpman does not look exhilarating, but plays really great. For me the game has the same cult status as e.g. Space Taxi, Boulder Dash or H.E.R.O.. Not that I would give those games 10 points, but for me these are all essential cornerstones of the (C64) computer game history. Everything else is blasphemy. 7 out of 10 points."

Camailleon: "It would be a nice platformer if it wasn't for the unfair situations as e.g. that the enemies are not set back after losing a life, so that it often happens that after reappearing you lose another screen life. Another mistake is that enemies can appear from the side where you currently have to walk along the border. Then you have no chance to avoid the enemy."

NSH: "I love this game, one of my favorites. To me the problems are just part of what makes it challenging- avoid getting stuck on ladders, avoid edges of the screen when not all enemy bullets are visible, and have a chuckle when you die at an inopportune moment such that you reappear on an enemy. Surviving the Grand Loop is a great and satisfying achievement. 9 out of 10 points."

Since 19.09.2008 the game is available as download for the Nintendo Wii Virtual Console. 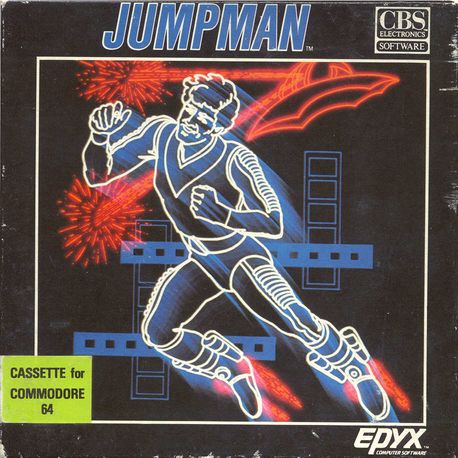 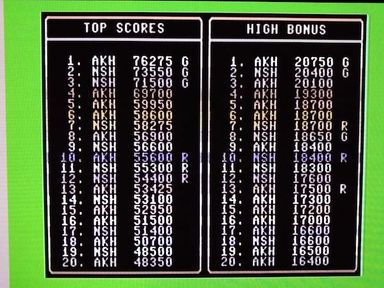