You work as a taxi driver in a town from the 23rd century and earn your money by driving passengers through this crazy town. When you do your job fast and good, you will be rewarded -after successfully playing all 24 levels, which stand for the 24 hours of a day- a bonus level named "Mystery Screen", and a final screen. In the game Space Taxi you fly a taxi and bring passengers either from platform to platform or into the next level. Steering the taxi must be done carefully, as landing too hard, touching edges of obstacles and characters or a collision with flying items as balls, comets, etc. will mean a crash. Also you need to land on even platforms. To collect passengers you should not drive into them but instead land next to them. If passengers are collected quickly and are flown to the pad of their desire you receive money in $. Not only with money you play against time, the gas in your tank is also limited. Therefore, in some levels there are platforms where you can refuel the taxi. The first levels might be easy to play, but the difficulty rises, i.e. more customers and platforms, more narrow flying paths, partially puzzles, disturbing elements, etc. The name of the level gives roughly away what can be expected.

The levels are designed simply but multicoloured and with funny ideas. Next to the animated Space Taxi and the customers, there are animated elements in some levels (mainly made of manipulated characters). The customers talk, there are sound noises from the taxi and a short melody when entering the new level. 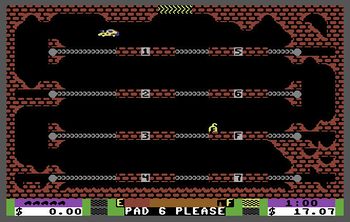 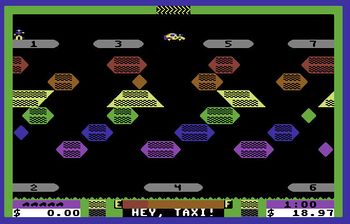 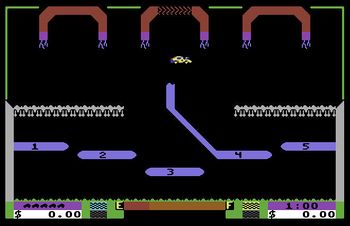 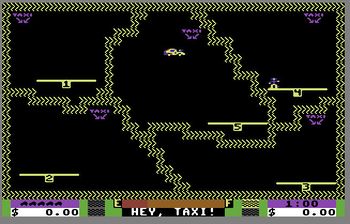 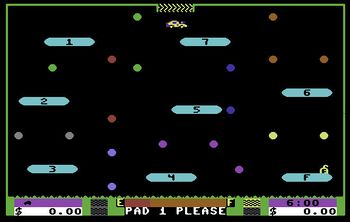 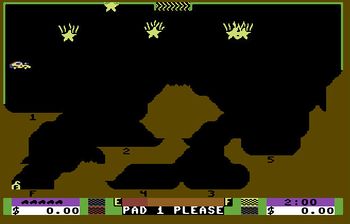 The game can be played with up to 4 players in 5 variations:

In the lower part of each level important hints can be found:

= info screen (with F8  one can clear the highscore list)

Controls in the game:

= give a thrust in the corresponding direction

If you make it to complete all 24 levels in one go, you will reach the secret 25th level. In this "secret screen" you are greeted with "Welcome to... MUSEWORLD" and on three platforms three obstacles appear, that refer to other games by Muse Software. So there is an ambulance for Rescue Squad (also by John F. Kutcher, 1983), a soldier with swastika for Castle Wolfenstein (Silias S. Warner, 1983) and a shooting robot for RobotWar (Silias S. Warner, 1981 released on Apple II).

At the lower screen there is the real secret:
"Eat the P I E until a "F I R E" glows, then go U P until it stops, touch a S T A R and you'll see the S E C R E T M E N U !!!".
The spaced written text parts are emphasised through a different colour in the game and give the key to open the "secret menu": for this you need to go back to the instruction screen (press joystick downwards in the starting screen) and press the keys, to which the emphasized text parts of the "secret menu" refer: first the key π  (which was in the C64, with emulators it is the combination shift+delete) as many times as it needs, until the word "fire" changes its colour in the lowest line (..."until a "fire" glows"...).Then the key ↑  (which is not the cursor key, with emulators use delete), until the colour is black again and lastly the key *  . Keypresses should be entered slowly, as extra π  and ↑  presses require re-entering the screen.

Jodigi: "It is a simple, but tricky game."

Klaws: "Graphics and sound appear a bit frumpy, but this doesn't derogate the game. Also the (alternating, not concurrent) game in pairs is astonishingly great fun. The only minus point is the very hard degree of difficulty in the later levels. It is astonishing that there is no remake of the game yet.... I give 9 out of 10 points."

Bergo79: "An absolute C64 classic... game fun with no end. 10/10 points from me. @Klaws: Space Taxi already celebrated its revival at the beginning of the 90s under the name UGH!. Also a great conversion of this game idea. This time you could play simultaneously with 2 players. http://www.thelegacy.de/Museum/5744/"

Camailleon: Just wonderful, the graphics, the sounds, the good handling. The controls are super and sometimes there are very tricky and narrow situations. Has at the beginning easy levels to get used to the game. Fantastic game!"

Virtualsky: "One of my favorite games on my C64. When I first saw this game, I thought the concept was very original. The idea of the game is straight forward, but the challenge lies in the designs of the different worlds (levels). The developers did an excellent job with the game controls and animations. The short musical introductions to each level I also find very charming. When ever I see a picture of a Commodore 64, sooner or later I always hear those iconic words in my head, "Hey, Taxi!". A game, like Space Taxi, is a perfect example of how a game can simple in design, yet fun to play again and again." 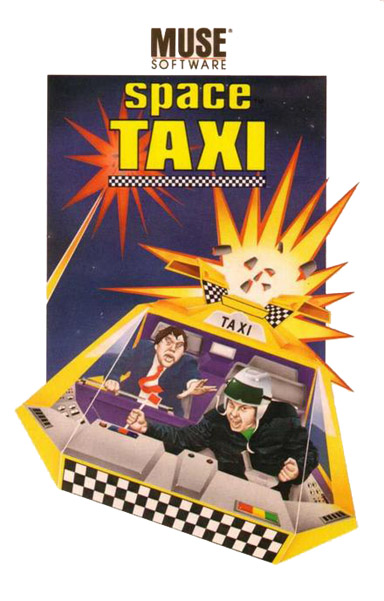 Interview with the developer[edit | edit source] 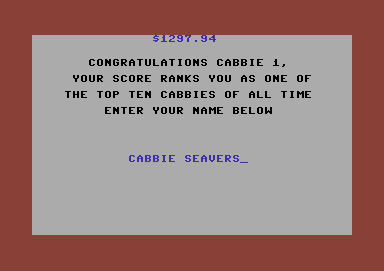