Wizard is a classic platformer and was developed at the same time as Jumpman. Wizard resembles Jumpan, e.g. in the possibility to set the game speed by pressing a key during the loading of a level or the elements in the levels.

What Wizard silhouettes against Jumpman are on the one hand the further elements as the treasures, the key and the keyhole, the diversity of the enemies and on the other hand the ability of the pawn to actively defend itself - that is with magic spells.

The aim of each level is to collect the key and after that to leave the level over the keyhole. The longer one is in the level, the less bonus will you get at the end of this level. In the level only the treasures get you points.

Wizard needs to fight through altogether 40 levels, each 10 levels per difficulty grade.

The game also contains a level editor, with which you can change or create levels and save them on disk.

There is no music in this game, but almost everything creates a sound effect. So e.g. there is a sound during the building up of the stones, the ladders, ropes, keys and keyhole. During playing alomost everything that Wizard touches makes a funny sound: when collecting treasures, climbing ropes, using letters, collecting keys and disappearing through the keyhole. The levels are multi-coloured, as the colours of the different elements differ from level to level. The colours can be chosen when creating a level in the editor. Apart from the Wizard himself, there are many elements that are animated. The enemies and also elevators move in the frame that has been assigned to them, fire flickers to and fro, the treasures flash in all colours. If Wizard runs into a peril, he will crash in a nice animation with a sound effect that may raise a smile in some people's faces. And if you look very close while casting a spell, you can see that Wizard makes a small movement with both hands.

Before the game starts


On the starting screen you choose by joystick up/down, whether you want to see the demo (Demonstration), play (Play the Game) or use the editor (Construction). A countdown is running and starts after finishing the option that is currently chosen. Default is this the demonstration mode. After choosing the option „Play the Game“ you get to the overview to choose the starting level:

After that you choose by joystick up/down the number of players and after pressing the fire button the first level is already loaded. The game speed is chosen by pressing one of the number keys during loading.

– Wizard moves left and right on the floor, if he encounters ladders or ropes he will go up or down.

– Wizard jumps in the desired direction. Here you need to mind that the landing must not be too far from the ground, as otherwise the wizard will crash.
Space  – Release magic spells, which do not need a direction input

– Release magic spells by joystick - if the spell is directed, it will go into the direction that the wizard just walked into
Space  +

– Release magic spells, with which a shot is triggered, in the corresponding direction


In the lower part of the screen for each level the player, the level number, the points, the number of lives, the speed, the bonus bar and the magic spell is displayed. Here the number shows how often the spell can be cast and below that its type in capital letters. The arrow moves with Wizard and shows in what direction the spell will be cast.

Every 10.000 points you will get a life, after every stage - depending on how you have done - several lives.

The editor is controlled over the keyboard and takes getting used to. The F-keys are mainly used. The colour of a level is determined by the extended character set of the C64.

1570: "Wizard is in almost every respect more than Jumpman. More levels, more extras, more going on in the levels. I think it is a bit a pity that there are rather many levels that are built up according to scheme F (key, keyhole, gold, a few enemies, fireball as spell, there you go). The fun of the game in Wizard comes more through the level build-up than through the specials as in Jumpman (Hot Foot, Runaway...)."

Robotron2084: "In contrary to the boring Jumpman Wizard bristles with variants and small gimmicks. First one should name the existance of the spells and the tactical component that goes with this into the game. And there are loads of differently acting enemies. In any event more levels. And although Wizard only forms a "copy" of Jumpman, it beats the model on the whole line. Forcefully! Diversification, hectic and bizarre sounds are on the agenda. Wizard is, to say it short, in my opinion together with Auf Wiedersehen Monty and Impossible Mission the fantastically best platform jumper on the cevi ever. A great game, that gets full 8.5 out of 10 points from me!"

Camailleon: "I loved to play this game as a kid, it has mulitple colours and diversified levels and you never get the impression that the next level is not feasible. Today I also know how to use the spells and it is also today great fun!" 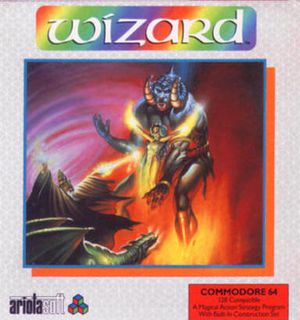 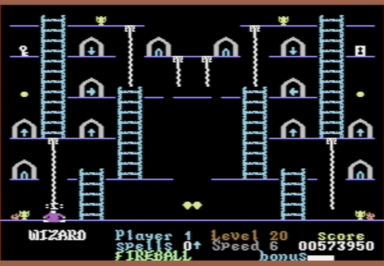