From C64-Wiki
(Redirected from Hewson)
Jump to navigationJump to search

Hewson Consultants Ltd began early in 1980, when Andrew Hewson started to distribute his own books such as "Hints and Tips for the ZX 81" and "40 best machine code routines for the ZX Spectrum". At the same time, hobby programmers were offered the possibility of having their programs commercially released. This lead to the "garage company" becoming a genuine enterprise with its own offices in 1982.

From 1984 on Hewson possessed their own copying units and were releasing games by Graftgold, as well.

In 1985, the company had a big success with Paradroid, and several similarly successful releases followed.

Rack It was apparently a low budget label under which games of Hewson were released. The label was set up by Hewson and Mastertronic. 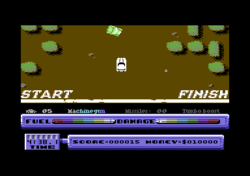