Shoot until it hurts!

Cybernoid is a shoot'em up by Hewson Consultants from 1988. The player fights his way with his spaceship, the name-giving "Cybernoid" under time pressure through three levels of a cave system stuffed with artillery and hostile flying objects to collect bonus items and extra weapons.

Sleazy space pilferer have brazenly stolen precious loads and hidden the booty in their hideout. The government sees red and sends out the Cybernoid to snatch the goods away from the criminals' claws. Although the Cybernoid does not seem very big and dangerous, it comprises a number of built-in extra weapons and can also ad hoc be additionally enhanced with equipment found on the way.

Shot hostile spaceships leave behind parts of the desired load every now and then. If you make it to collect load of a total worth of 1500 points, you will get an extra life at the end of the level and the value of the load is added to the score as a bonus. If you do not make it you can be very annoyed about it. Also additional equipment as a unit to shoot backwards, rotating satellites to shatter close enemies as well as canisters that will upgrade the last chosen extra weapons are sometimes dropped by shot pirates. 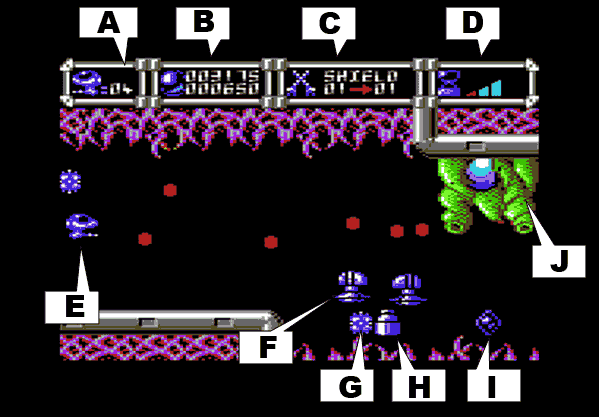 Cybernoid fights himself through a rush of enemies to the next screen.

You will be looking in vain for a scrolling here, the singles screens are visited by the flick-screen method, whereby there is no possibility to return to an already left screen. The graphics are brightly coloured and detailled, an alien-like, "bio-mechanical" air runs through the whole game.

Also, the animations of the hostile spaceships are successful, their missiles on the other hand seem plain. If a bigger enemy or "decoration" is shot, a cascade of particle effects burst out onto the screen, which for a short time aggravates orientation. On the whole, the game seems rather "crammed" with shots, explosions and everything moves and turns which sometimes goes at the expense of speed and above all the overview.

As a disadvantage to the playability is the extremely overdimensioned size of the sprites, there are sometimes claustrophobic situations, similar to Bomb Jack. This, combined with a rather finicky collision query, makes the bigger part of the game's difficulty grade.

If you decide for the ingame music, you will be served an energetic SID opus. The alternatively and additionally selectable effects are far from being as impressive as the music but still inventive enough.

Unfortunately, the highscore list is saved in none of the versions.

The extra weapons are selected with the number keys 1  to 5  and activated by a longer press on the fire button. Each weapon is only available to a limited amount and if the supply of a certain weapon is empty and shall be refilled, you need to collect a canister while the desired weapon is chosen.

The extra weapons in detail:

Choose the keyboard controls in the title screen and select Y, X, E, S for movements and fire. Then choose joystick controls again and start the game = unlimited lives.

If this is not enough, you should take a look at the "Jewels" version, here you can make even more adjustments as e.g. starting level and unlimited lives.

Robotron2084: "Cybernoid is a wild, coloured but devilishly hard shooter where sparks fly and the ears are coddled with an intoxicating sound setting. If only the sprites were not so oversizedly designed and the collision query had been made a bit fairer, the game would have been an absolute hit. But I think this was done on purpose, as the game has altogether only three levels. Well, that's how they were back then, the programmers. The game has situations in which you only can tear your hair cholerically, but it is so much nicer having proceeded another few screens. And if this all is not difficult enough for you, you can take a look at the follower. I give 8 out of 10 points."

TheRyk: "Bizarre but coherent colors overdose with excellent music by Jeroen Tel at his best. Weaponry upgrade and extra weapons make this a shooter somewhat different. Though back shoot and mines are rather useless, drones and bouncers really kick some enemies' asses. Still, all in all it's rather difficult without cheating/trainers. Some really nasty situations are repeated, e.g. screens 5, 7 and 10 in level 1, which is boring and annoying, since shields are hard to find and not everyone's motor skills are fine enough to master those screens without loss of life. However, Cybernoid is one of 1988's better releases. Considering the overall quality as well as some bugs and unfair situations, I rate it 6 out of 10."

Cybernoid was originally created for ZX Spectrum by Raffaele Cecco. The C64 version was developed by Nick Jones, who also converted several other Cecco's Spectrum games for C64.

The existing releases of the C64 version include at least the following:

Trainer allows next to unlimited lives and time also the adjustment of extra weapons and starting level.

From left to right: ZX Spectrum, Amstrad and Amiga/Atari ST Version (which were identical, as the Amiga version was a direct covnersion of the ST version) 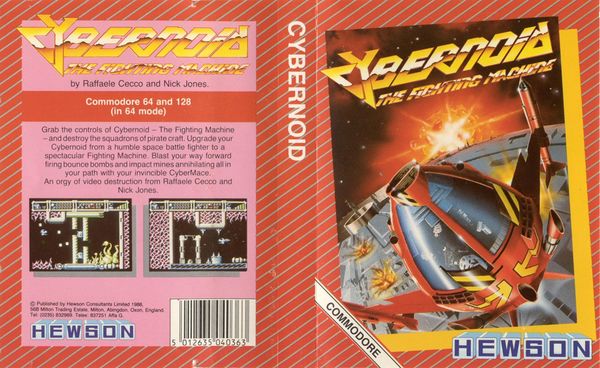 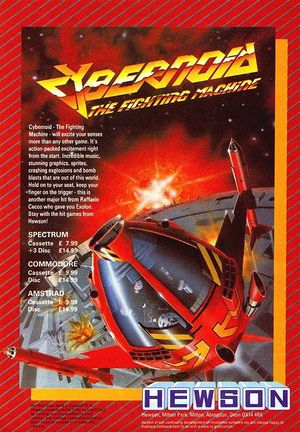 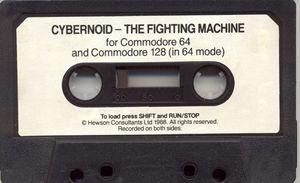 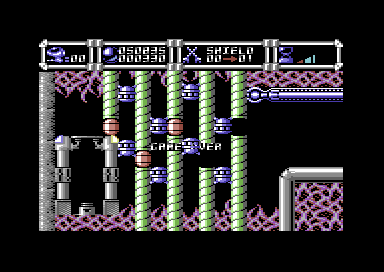