In 5th Gear you take part in an illegal race, where every resource can be used to gain the victory. You drive in three different levels against the clock and you have to avoid obstacles and rivals. You receive points if you shoot other cars, boats, walls etc. or if you jump on a hill. But you have to watch out for helicopters and hostile flak. Different modifications (initial equipment, weapons, fuel, new car) can be purchased in the corresponding store. As the start is at the same time the finish you have to drive through completely to the "TURN HERE" and circle it, to drive back again.

The gaphics is appealing, the instruments are easy to read, but unfortunately there was too little space admitted for a proper natural scenery, whereby the range of sight to the front gets too small to react to unforeseen events. The tunes in between for the levelstart, shop visits and Game Over fit very well and are stirring. Outstanding is the animated start screen with the theme melody with "asiatic" touch.

Basically everything that moves can be shot and everything that is static should be avoided. Bushes and shots each damage the car about a fifth, collisions with walls, other vehicles and cars are deadly and baths in the water result also in total loss.

At the beginnig you own 10.000 Dollars and 5 cars that are equipped with a machine gun which can shoot cars and boats.

The game is operated with the joystick in port 2

To enter the stores you have to park in the skidmark next to the store and then press fire. With up/down you select the item and with fire you confirm the choice. To leave the shop choose EXIT. In the skidmark you can see what the shop has to offer:

FXXS: "5th Gear is an extraordinary race game, whose (almost) only disadvantage is the much too small field of view. If you know the track well, it is again and again fun to play, for newbies it is because of the limited sight impossible to bomb down the track. Just the same, 9 points from me, partially because I was fascinated by the game (and the title melody) in 1988.

TheRyk: "Playable race and shoot game though 'racing' is a little euphemistic, because the dangerous course rather forces you to crawl. Many aspects are really well done such as the music, the jumping or the upgrade via shopping. Sadly you have to trust to luck in unknown terrain, since you cannot see very far ahead and have no radar system, so I rate it 'good' 6 points." 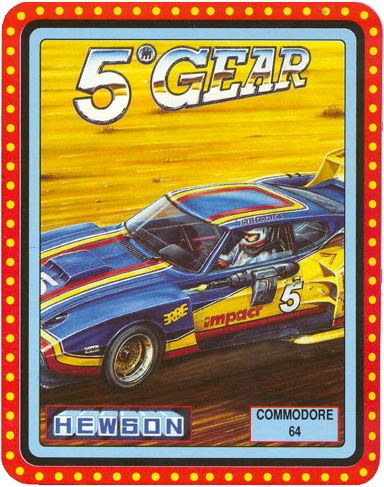 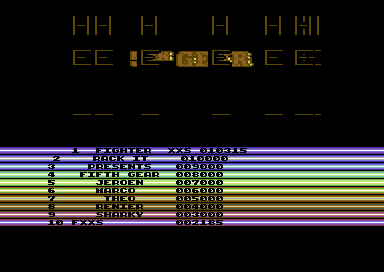