Mervyn, a sorcerer's apprentice was in one of his practice hours with his mentors. He was about to try a new spell for a better look, but this failed and turned him into a frog. While being in this state, evil warlocks appeared and killed all his mentors. He alone was saved, as he appeared only to be a frog. Now Mervyn is the only one left to take revenge on his attackers, by destroying all the warlocks.

So he heads off into the dungeons of the warlocks, consisting of 8 levels. He hasn’t lost his magic abilities and can use them to defeat the minions of the warlocks. The warlocks themselves need to be defeated in single fights, by putting together the word "RANARAMA", before his life energy is drained.

Mervyn can still do magic and possesses spells on a low level, which he can raise during the game. Equipped with this, he dares to go into the dungeons of the attackers – but for this he needs energy, which he uses up but which he can also refill.

The game RANARAMA reminds a bit of Paradroid (fights with warlocks, lifts, darkening of the level when all warlocks are defeated), but has also Gauntlet elements (exploring the map, nests with monsters).

There is no scrolling, but the single screens build themselves up during the game and can be entered again and again. New rooms appear fluently. Unfortunately, some enemies cannot be defined clearly, as they are only shown in black (in the original spectrum version they are coloured). Therefore it might happen that you cannot see in all the confusion, how many enemies you are facing. The screen is well-arranged in the playing mode. Except for the main happening you can only see the energy bar. Points and facts about the currently used spells are stored in a separately available screen. One can also concentrate well on the “fight” as this is showed in a separate screen as soon as the player meets a warlock.

A fast melody is played in the title screen, while during the game appropriate sound effects for jumping, shooting, spells and during the fight are played.

When a level is finished, the minions that are left, patterns and symbols are displayed in black. Mervyn is then displayed in bright grey and energy crystals stand out in green.

Unfortunately, there is no highscore list in this game. The currently highest score is displayed on the title screen from time to time.

There are four different types of spells:

There are 8 different spells of each type with different levels. At the beginning you start with the weakest spells. Explanations for each type are given in the menu. You only see spells, which you can afford to cast with the runes you carry.

Table of all spells, their required runes and their effect:

In the spell menu you can scroll through the choice of spells available.

Enemies and their points[edit | edit source]

– Frog jumps into the corresponding direction

– shoot into the corresponding direction

while sitting on a glyph – function of the glyph is triggered

A simple fight against a low level warlock.

in lift mode (Glpyh of Travel)

- back (before choosing a direction)

– go to the chosen direction


in map mode (Glpyh of Seeing)


in spell mode (Glyph of Sorcery)

when the desired spelll shows - "buy" spell, the required runes are removed

There is no solution as such, as the warlocks are spread randomly and the runes you get are different at every game.

Camailleon: "If you occupy yourself with the game for a while, it is really fun. Although it reminds me a bit of Paradroid, it has further elements which give it its own charme. I could have imagined the minions to be a bit more detailed and coloured. In other respects, this game is really great!".

Robotron2084: "First I was thrilled by Ranarama: 'Ah, a fantasy type Paradroid? Great!' I thought. But after some time the defects at play came more and more to the fore – next to the obvious technical inadequateness as slowdowns and mean spectrum graphics. The game can be a long haul, a session can easily last half an hour or longer, of which you spend a good part with jumping through the already empty sections and the huge levels. For me this is just too little action in contrast to the comparable Paradroid. Furthermore, the collision query is rather moody, you often miss the hostile objects although you are standing directly next to them and enemies sneak up on you in the very broad blind angle. If you then lose your energy spell and are reborn as a mortal in a room full of enemies – far away from a Glyph of Sorcery – then you are frankly speaking gone to hell. For me the game was a flash in the pan. 6 out of 10 points." 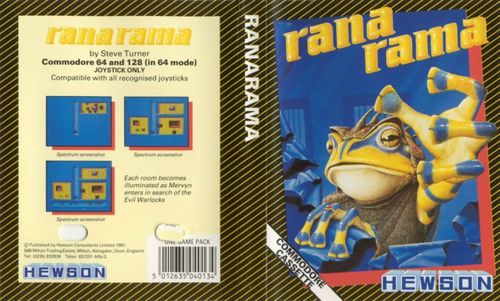 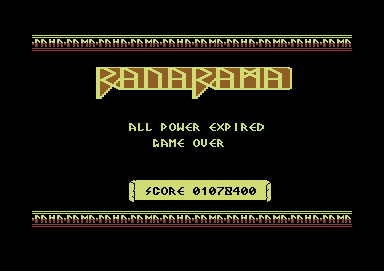