Armalyte is a shoot'em'up similar to Katakis or Salamander. Extra weapons appear in the shape of "Pods", which change to different extras one after the other when shooting at them. The “more valuable” extras appear only at last. Furthermore, Armalyte stands out by an unconventional super shot, which is activated by a long press on the fire button – as in other games – but can take one of three selectable shapes (single shot which can go through strong walls – helpful in only few situations, expanded shot, continuous shot) and draws its energy from "batteries", which have to be reloaded but can be upgraded as extra. Difficult situations create less frustration in Armalyte than in other shooters, as the game continues seamlessly without being set back to a checkpoint or losing equipment. With a satellite (always there in the single player mode) hostile shots can be absorbed but it has no effect on the enemies. The satellite can be disconnected and then stays stationary, otherwise it stays away a short distance from the ship in the opposite direction of the last movements ship (by moving the ship shortly up, the satellite moves below the ship).

The game graphics are quasi monochrome. The animations are very fluent. Exploding enemies interestingly continue going on their given path ;-). There is only music in the title and the loading screen. It is rather idiosyncratic but good and uses different arpeggio versions as accompaniment and explosion sounds as effects. The levels are not as diversified as the ones of e.g. Katakis, but in return the enemies do not just fly straight but mostly in formations in curves. Artefacts as "stuck" shots, colour bugs or cosmic defects as visible tiles by the use of sprites cannot be found in Armalyte.

The keyboard contols are explained in the title screen.

In the title screen:

The game is started with the fire button of the joystick.

?  - switches the super weapon of player 2

1570: "I liked this better than Katakis or R-Type. Maybe I liked the system with the extras better. I also thought the graphics were cooler, whereby this is surely a matter of taste. The game is rather difficult due to the high speed. Almost all difficult situations can be mastered with practice, in contrast to other shooters there are hardly unfair situations (in which fate plays a big role). Unfortunately, the in my opinion very good music by Martin Walker cannot be heard in the game."

Robotron2084: "I agree with 1570, that a kicking background music , would have added to the game. Furthermore, I find it annoying that the explosions of shot enemies toddle around happily so you cannot distinguish them from enemies still alive. This makes the game very confusing. Nevertheless it is a blast and technically head and shoulders above the Katakis which is praised to the skies, although I still prefer Delta. 8 out of 10 points."

Bamse: "One of the best horizontal space shooters. Unbelievably many sprites on the screen, futuristic graphics, great title tune, equally good sound effects and almost equally perfect playability as the best in the class "IO" ! With the many enemies and the own satellite it is unfortunately partially a bit confusing..." 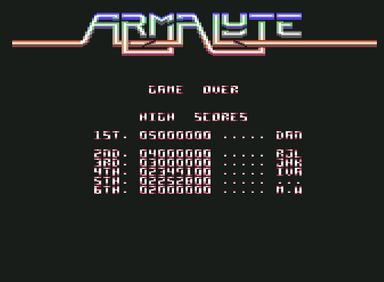