From C64-Wiki
(Redirected from arcade)
Jump to navigationJump to search 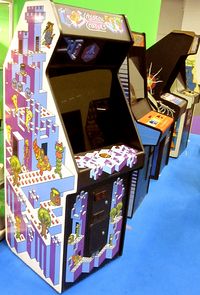 A video arcade machine at the computer games fair gamescom in Cologne (Germany 2013): The game Crystal Castles from Atari (1983).

The Arcade genre originally referred to coin operated video games. These games were almost always had rules that were easy to understand or intuit and had a fast pace. The term quickly widened to refer to ports of such games to home consoles and computers. Soon some platform games with simple rules and a fast style of play were called Arcade style games. 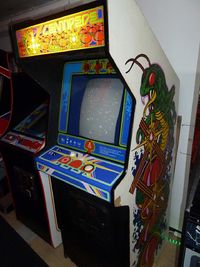 Centipede from Atari (1980). Once of a lot of classic arcade games of the "golden age of arcade video games".