Ladybug is a C64 conversion of the maze game "Lady Bug" which was brought into the arcade halls by the company UNIVERSAL in 1981 and which was one of the successful followers of the famous Pac-Man.

The aim of the game is to "eat" all the flowers (points) and the bonus flower with the pawn, a ladybug (or ladybird), and reach as many points as possible. You start the game with three bugs (lives).

The pawn is disturbed in its task by four hostile insects that emerge one after the other from their nest in the centre of the maze. Their speed rises in the course of the game. When the last insect has left its nest, a vegetable appears in the middle of the maze which gives bonus points when it is collected.

In the maze next to the normal flowers also several bonus flowers with letters and hearts are scattered. You get an extra life or 10.000 bonus points when you make it to put together the words „EXTRA“ or „SPECIAL“. If you eat a flower with a heart, a multiplicator is switched on that doubles all other points that come after that, the second heart triples them and the third even quintuples them.

The game has another special feature which differentiates from the known Pac-Man: these are 20 green revolving doors with which Ladybug can changed the maze. The "evil one's" cannot turn the doors. The skillful turning of the doors is the only possibility for Ladybug to escape the followers; because the bug's speed stays the same in all levels, while the speed for the enemies rises. You should close the doors quickly when you are chased by a follower; if it comes too close to Ladybug, the turning door will not have any use: The "evil guy" will also slip through and get the Lady.

The skulls that are on the field mean death to the Ladybug and also for its opponents. The player loses a life (one ladybug) when running into a skull. The other insects are transported back to their nest in the centre and get into the game when the timer has run down again.

The timer is an interrupted white stripe that runs around the game area. When the lady bug has entered the maze, the single elements of this stripe change their colour in clockwise order: they get green starting at the top. When all elements of the stripe are green, the first opponent leaves its nest and the next round starts; all elements get white again one after the other. The speed of the timer rises with rising levels.

Each level fits into one screen (no scrolling) and consists of one maze with turning doors as passages. The sprites are fluently animated. Simple but pleasing graphics. Unfortunately, no complete conversion of the arcade machine.

At the beginning, always collect the dots around the centre of the maze first, as the insects will only appear after a certain amount of time.

In the CSDb exists a few versions with trainer mode.

H.T.W: "Unfortunately, this is not a complete conversion of the arcade machine for the C64, some "odds and ends" are missing with the bonus points and in the later course of the game. Nevertheless worth playing".

Werner: "What a pity! Level 1 does actually look promising. But it seems that the programmer got pressed for time in the middle of the development. Or he simply could not be bothered any more to finalise the programme properly. From level 1 onwards: same graphics, same enemies, same sound effects. This way it gets boring very quickly. Unlinke the arcade version, the game did not ignite a spark at all. 5 points from me."

TheRyk: "As has already been said, unfortunately it's got the status of an unfinished preview with always the same maze; only in 2011 Lady Kakerlak provided a really playable version. Ladybug is a game you can play forever in theory, but it will soon get boring. The possibility of being spawned right in front of or even on a skull, is really unfair. Friends of revolving doors should rather check out Drelbs. Ladybug I can only rate 4 points as it can be some minutes fun every so and so many years."

DATA-LAND released a remake of the game named Lady Kakerlak in 2011, where there are not only several levels, but also an editor, see also links. 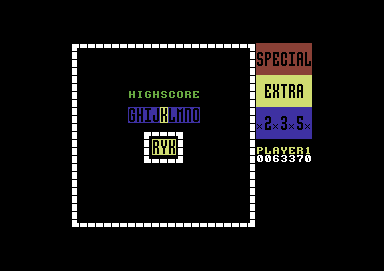