Sounds scary, doesn't it? That's what it is. A demon has kidnapped the knight's, that is your, girl. So he gets started to free her. The demon doesn't look at it deedlessly, but he sends all kinds of gloomy creatures towards him: zombies, ghosts, demons and even shooting carnivores.
You need to fight yourself through four rather different levels, which are each devided into two parts. The passage from one part to the next is guarded by a weaker demon (death bird), which needs to be defeated with three hits. To get to a higher level, you need to defeat a strong demon (Ork or dragon), which guards the key to the door. At the end awaits you as a guard of the girl a big Chinese dragon.
Further game elements are new weapons, that you find in your search, as well as the time limit (2:59 minutes) which needs to be kept in every level. If the knight is hit by an enemy, he will lose its armour. Now he is invulnerable for a few seconds, but then the next hit will kill him fully and the current part must be started again.

In 1986 the popular game "Ghosts'N Goblins" appeared in the amusement arcades. In this game you guided Sir Arthur the knight through seven sideways-scrolling levels by jumping and throwing weapons.

The seven levels have the following themes:

In the same year of its arcade release, the game was ported to the C64 by the company Elite; Chris Butler was responsible for the conversion. Of the original's seven levels, the C64 features only four; this is because Elite - which had contracted the conversion to Chris Butler - insisted that the game should be run completely from memory without having to reload from media.

So the first four levels of the arcade model were converted into the C64 version. The order of the third and fourth levels were changed because the cave was more appropriate as a final level than the fire bridge (number four in the original).

Chris Butler was an expert C64 game programmer, which has been proven by his later work. The graphics are nice to look at and there are no weak spots to be found in the gameplay. The music was composed by Mark Cooksey, who wrote some of the most popular pieces of music for the C64.

Not for nothing is Ghosts'n Goblins one of the most popular C64 games, even to the present day.

Three years later the successor "Ghouls 'n Ghosts" was converted for the C64; unfortunately, it did not compare to its great forerunner, although it was more extensive than the original.

The game "Ghosts'n Goblins" has a 2-D screen with fluent scrolling through the whole level. Very good animated sprites and music, which fits very well to the game, also elaborate graphics.
Four rather different levels, which are each divided into two parts:

Each of the eight parts is several screens long, and some even a few screens high.

This points you can get:

The game is only over by losing all lifes. If you end successfull the level 4 with lifes, you restart the nightmare with level 1 again. 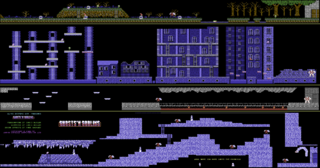 Sledgie: "The games is very quick and requires skill and a great deal of patience from the player."

Denni: "I found it very hard. But it was quite fun anyway."

Jodigi: It is really a difficult, exciting game, where I needed a lot of practice. In spite of that, the C64 version is not very good, especially as the machine version contains many more levels, therefore a small devaluation.

Guybrush: "It was damn tricky, but maybe exactly because of this massive difficulty it was so popular. 8 points from me."

MontyMole: "In contrast to most of the arcade conversions it has aged very well. The C64 version is self-contained enough to be fun still today, despite the now available arcade version."

o.b./TRSi: "This game was one of the few exceptions of arcade conversions: it was at least as good as the machine version."

Blubarju: "Graphics and sound are great. The controls are also ok, but why do such games always have to be so hard (at least for me)? Anyway, 8 points from me."

Rather a crazy trainer as a mod!

The original arcade game with all complete 8 levels was developed as fan project for the C64 by the group Nostalgia in 2015. 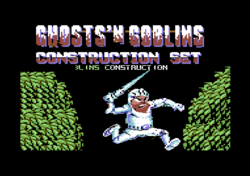 Titel screen of the constructions set. 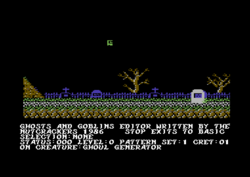 In the year 1986 the group Nova Software House or Nutcrackers developed the Ghosts'n Goblins Construction Set for editing own, modify levels. 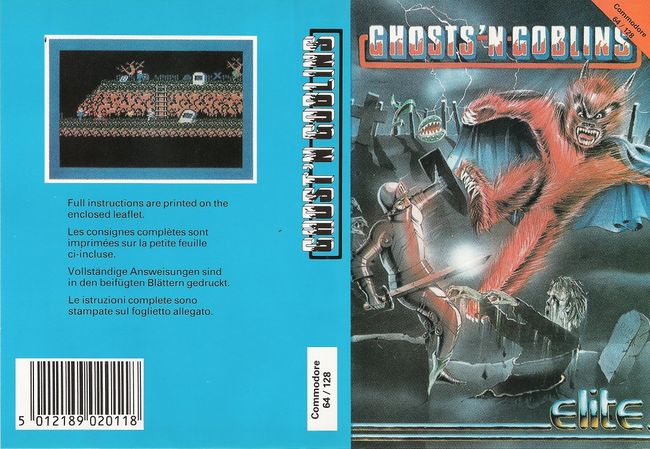 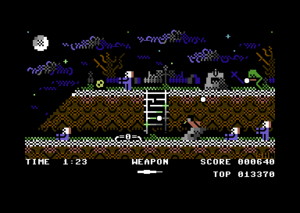 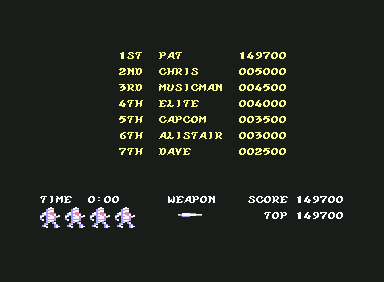