Experience the return of Arthur, the fearless knight, that needs to rescue the kidnapped princess "Hus" in five exciting levels full of action.
The game offers numerous extra weapons and "special" joystick controls.
In this perspective, they rudimentarily tried to present the game Ghosts'n Goblins in pseudo 3D. During this some interesting alterations were made.

In 1988, the follower of Ghosts'n Goblins - Ghouls'n Ghosts - was released in the arcade halls with altogether seven levels. In the following year the game was converted for the C64 by the company Software Creations and published by U.S. Gold.

2D screen that displays a pseudo 3D underground world with fluent scrolling through the whole level. Creatures or respectively demons made of multicolour sprites appear rather comical due to their format. There are interesting animations of some demons and in the levels, as e.g. the rain. As the levels are graphically rather elaborate, every level needs to be loaded.
The start screen has an animated character set. In the start screen you can choose between background music and sounds FX. The background music fits the topic rather well. 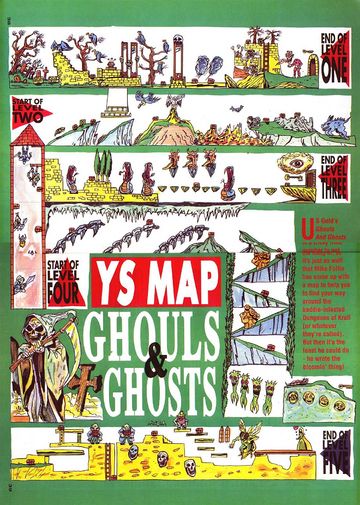 map for the game

Joystick controls in the title screen

Joystick controls in the game 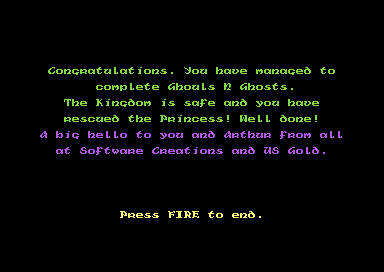 Choose WIGAN RLFC as name in the highscore list. In the next game now the following keys can be used:

TheRyk: "There's really a bunch of good ideas that could have made this sequel a real hit, e.g. I appreciate that these grim reapers appear rather steady and do not kill you instantly as the first randomly zombies who dig themselves out of their graves in Ghosts'n'Goblins. Also the mage who casts that spell turning the player into poultry is kind of fun. But some of the predecessor's shortcomings are even more annoying here. The weapons upgrade system seems even more pointless. If you happen to catch the torch (long-burning sparkler with poor flight quality) or axe (flies like a one-way boomerang, unfortunately upwards only), you're practically done, as both are next to useless in level 1. Also some modifications are not for the better. The slopes really need a lot of practice to cope with and are not executed really thoroughly - frequently it looks like Arthur's floating. The way to the first leg in level 1 is way too long and it's really frustrating to do all that way again. However, the music fits extremely well and is somehow fascinating. All, in all, 6 points."

Jodigi: "Interesting sequel, which, however, caused some real problems for me, at the latest in the levitation level (level 3)..." 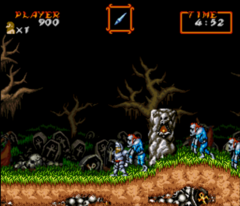 Part one of a longplay by DerSchmu.
The second part can be admired here Video at YouTube . 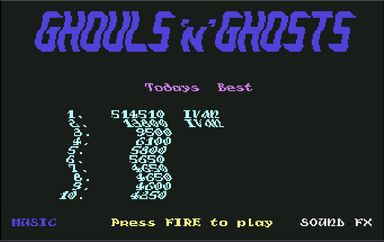