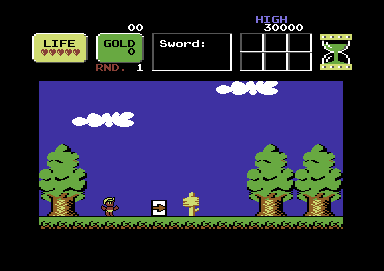 Eleven years have passed sind Tom-Tom, the Wonder Boy, has defeated the seven giants and rescued his girlfriend. Now there is a new mission for our Wonder Boy: The Monster Land, home of many peaceful creatures, is in great danger. A dragon makes trouble and spreads fear, horror and terror. And as a high point to this all, the scaly beast has also kidnapped Tom-Tom's girlfriend.
So the Wonder Boy starts out to free Monsterland from evil creatures, win duels, find treasures and weapons, strike dead dragons, rescue the girlfriend, discover secret passages, solve puzzles... uff...
Well, being a hero is not easy, but fortunately, Tom-Tom is more than that, he is the Wonder Boy!
And furthermore you have during your long quest the possiblity to go for a beer or a cocktail every few meters, this should sweeten the job a bit. There should be money to be found on the way to buy equipment and if all else fails, you still can visit a doctor.

If Tom-Tom masters all perils on his journey, he will fight against the dragon and if he wins, he will free his girlfriend. Again... 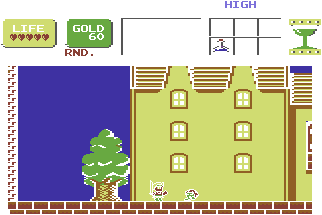 In the towns it is not peaceful either...

The game consists of twelve diversified levels. These are designed with many colours which creates a distinctive atmosphere. In several game test from 1989 and 1990, however, the graphics of the C64 conversion was mostly critized. Wonderboy in Monsterland was supplied on a double-sided disk.
Next to dungeons, the hero has to fight his ways also through caves and woods, there is an underwater tour and the visit of many towns on the programme.
For each level there is a time limit which can be elongated by buying or collection certain items.
Defeated enemies drop next to money also valuable equipment. There are several of these bonuses hidden in each level, it is worth looking for money or secret passages!
Apart from smaller problems when climbing ladders, the controls work very smoothly. Your progress cannot be saved. 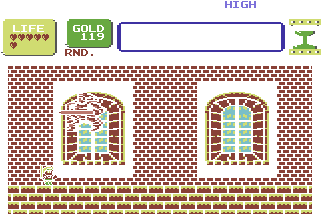 The red night has a fierce armour...

Can be bought... (and partially are also dropped)

Something behind the wall? Lets knock...

ASM January 1990 (Graphics: 7/12 Sound: 3/12 Vote: 4/12): "Concerning the game on the C64: You can well use the empty cassette and the cardboard box could be used to collect glas marbles... or something like that..." (original German comment by Michael Suck)

Power Play Special February 1990 (Vote: 59%): "On the C64, the player would like to eat the joystick due to the bad technical conversion." (original German comment by Michael Hengst)

Shmendric: "A first class Jump&Run with diversified levels, partially tricky end bosses and only few unfair situations. Other conversion might have looked better, but the fun in the game was kept. No idea what all the nagging of the editors at that time was about, on the C64 you had as much fun as with the arcade machine."

Guybrush: "Great game, which has not a too easy difficulty grade. I liked playing it. 9/10."

Starkiller: "The graphical appearance on the C64 was not really a hit. If you compare it to other conversions it is really a turn-off. But otherwise there is nothing to moan, it stays a first-class platformer." 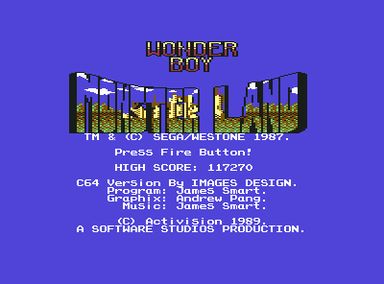