Wonder Boy is a classical Jump 'n' Run, which already was released by Sega as arcade game in 1986. In the game you control a small “Wonder Boy” over a scrolling screen through different landscapes with the aim to rescue his little girlfriend. But the way there is not quite unperilous, as abysses, boulders, fires and many different animals make a stand against the small hero. Fortunately, he also finds useful items as the big “surprise eggs”, that give him special abilities or numerous fruits, which give him back life energy when he collects them.

Cleanly scrolling levels from left to right with graphics that seem a bit bold but with fluently animated, colourful sprites. The game consists of seven areas with each 4 rounds which again consist of four parts. After every region an end boss awaits you. The graphics do not change in later areas. If switched on, you will be accompanied by an endlessly playing background tune. While shooting, jumping and collecting food sounds are played.

The game consists of seven areas with each 4 rounds which again consist of four parts. The parts are marked on the way with sign posts. Round 1 always plays in the wood, round 2 close to the water, round 3 in a cave and round 4 in a surrounding with mixed background (buildings, wood, wall) and leads to the end boss. When an end boss is defeated, an item needs to be picked up which then is lighted in the upper rim of the screen.

On the way to his cutie Wonderboy needs to jump over different platforms and abysses and at the same time defeat all kinds of animals. To have enough energy, he can find food in the shape of fruits, sweets or sandwiches on the way. Furthermore, there are fire and rocks, which block his way.

In the upper bar of the screen all the relevant information is shown. With yellow symbols the lives that are left are shown. You can collect more lives that can be displayed. Below this a frame shows, whether you carry the axe or not, next to it you can see 3 of the 7 items you get after defeating an end boss. If you have collected an item, it will be shown in blue. Items that are invisible at the start, will scroll in as soon as it is their turn. In the right part of the upper bar dominates the important energy bar, which must not get empty or else a life will be lost due to “No Vitality”. Above it you can see the current number of points per player or respectively the highscore.

Contents of the egg 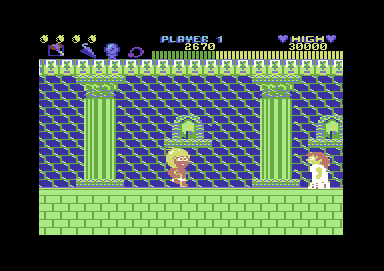 Done... the cutie is rescued.

Jodigi: "A really nice Jump&Run game with party tricky situations, especially when the Axe can currently not be used. The music is nice but on the long run a bit monotonous."

Helmutx: "I loved Wonderboy as an arcade game!!! Unfortunately, the C64 version is not so successfully made."

Camailleon: "The arcade machine with Wonderboy was standing in the lido when I was young and sometimes I was allowed to play. When I had the game on the C64 I instantly recognized it. A great Jump & Run with a slightly lower difficulty grade."

The original aracde version was animated graphically more laboriously than the conversion for the C64. The game principle and the fun did not suffer, the computer games community was generally very satisfied. It was also not a too great disadvantage that the C64 does not support a second fire button for jumping. 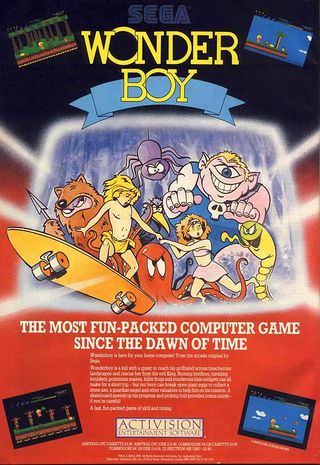 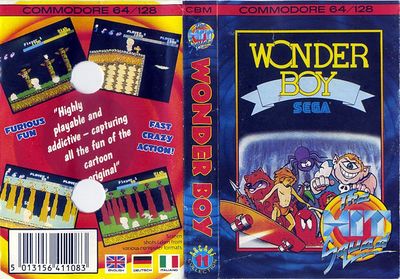 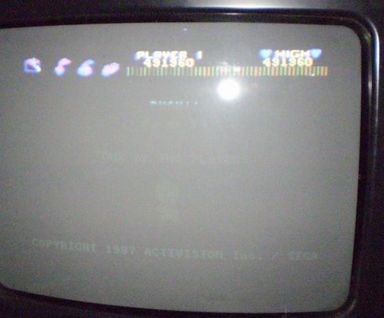