As the name already implies, you need to defend something in this H-Scrolling-Shooter - which are people that are threatened by an alien invasion. Flying saucers and other UFOs try to abduct the people standing on the ground and finally to kill them. The player is in a spaceship and has the mission to destroy the UFOs and rescue the captured people.

Controls and course of the game: At the start you can choose between three difficulty grades with the key F3  and with key F5  you can set if you want to play alone or with someone else. The ship is controlled with a joystick in port 1, but this unfortunately counts also for the second player. F1  starts the game. You can fly to the left and right ("bidirective" H-Scrolling). With fire you operate the laser, with Space   you can trigger smartbombs (all enemies on the screen are eliminated). The ship and also the laser cannot collide with the background, so you can ignore the mountain landscape. You should not shoot people. If you destroy a UFO that has abducted a captive, you have to catch the man or otherwise he will fall too deep. With a lower falling height, the rescued man will also survive without the player's help. Every 10.000 points you get a bonus life. At the end of the level there are bonus points for the surviving people.

Obviously Atarisoft wanted to convert the Arcade original 1:1 concerning the linear mountain chain. So the graphics are very, very simple, particularly as in this time and also before that graphically better games were released for the C64, as e.g. Choplifter. It already contained scrolling into both directions in 1982 and the idea with rescueing people as a modification of a mere shooter. The sprites and explosion effects can be described as moderately detailled, at least they are partially a bit more complex than the arcade version. The map or "radar" is theoretiocally a nice feature, but only gives information about where the other sprites (humans, UFOs) are, because the course of the linear mountain-lines-landscape is due to the impossibility of a crash with the background irrelevant and only serves as an orientation.

There is no music, the FX are same as the graphics rather primitive and can by far not come up to the arcade machine. But at least there are different sound effects for different actions as e.g. the abduction of humans, receiving a bonus life, etc.

At the beginning of an Attack Wave (=level) you should instantly take orientation with the help of the map, whether there are more aliens to the left or the right and then fly into the direction where the most danger is. By raised hits and the number of rescued people the score rises and you get an extra life more quickly. As soon as 5 or more enemies or especially fast enemy sprites are on the screen, you should use the SMART-bomb.

Until now it is not known, how many Attack Waves there are or if the game has an "ending" at all.

But with the difficulty "Novice" you should be able to cope well during the first three "Attack Waves".

Matthias: "My very first game that I played on the C64, I think I was 7 years old then, nice thing, gripping."

Robotron2084: "Another totally mucked-up version of a arcade machine classic by Atarisoft. Slow jittery graphics, scarce sounds, too little sprites at the same time and by this easy as a pie. In short: a single terrible horror. Then I'd rather have "GUARDIAN" or simply Dropzone, Defender clones that show unequally more dynamics. This botch gets from me full 2 of 10 points. Yuck!"

TheRyk: "Not too bad back then, but could neither compete with Choplifter nor Skramble if you only consider two similar games of that time. Not by a long chalk as good as the Arcade version if you compare gameplay or FX. The C64 version is so-so, which I rate 4 points, but only fans or true nostalgics really need it in their collection."

Defender was originally an arcade machine already published in 1980, which was very popular, so that in the following years versions for almost all common home computer systems were released.

The video to the Neue Deutsche Welle hit "Herbergsvater" by Joachim Witt starts with a sequence of the arcade machine. 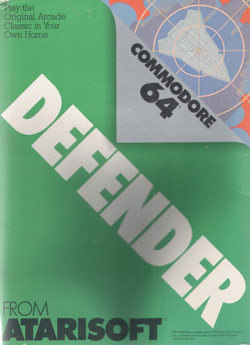 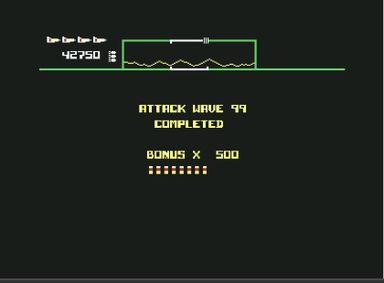