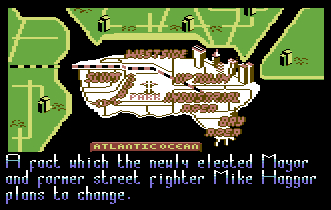 Jessica is a cute blonde and lives in an American city named Metro City. That the crime rate in this town is many times higher than the one of New York and even a small stroll to get some cigarettes is only possible with a well-equipped small army, does normally not need to disturb the young woman. She is well-sheltered and protected, because her father is the mayor, Mike Haggar. This former professional wrestler has made his business to clean up the gangster city and thus took on the crime world of Metro City both politically and concerning the election campaign strategy effectively. An urgently necessary undertaking, after all, the town has been named in several magazines and newspapers as "Criminal City" for some time.
The local underworld now consists to a great part of members of the Mad Gear Gang. This syndicate could stem from a classical end time movie and unfortunately the boys have already some complete districts under their control.

Unfortunately, the Mad Gear Gang has made it to kidnap the beautiful Jessica. Mayor Haggar receives a video message including demand from the kidnapper. The gigantic father prefers negotiating with the fist before words and so he sets out together with Cody Travers, the future son-in-law and his mate Guy, to beat up the evil boys. Coincidentally his two combatants are a Martial Arts expert and a Ninjutsu professional. The trio does not take any weapons with them in trust of their own abilities. 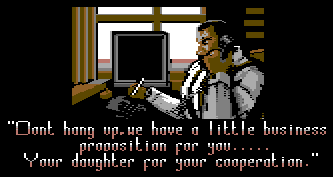 As Mike, Cody and Guy prefer to slap through the town (literally) instead of simply going by car, the aim is to arrive alive in the Mad Gear Gang headquarters and then severly wrap Mr. Belger's, the upper boss', wrist there. This way, the daughter is freed and the evil gang is busted. 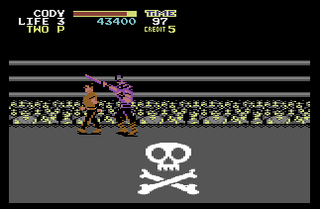 For a change very sportively in the ring...

Final Fight is a vertically scrolling beat 'em up in the style of Double Dragon or the console game Streets of Rage. The arcade game was converted for numerous systems, the differences between the systems are partially considerable. In the version for the C64, the two-player mode was done and all characters known from the original appear. The bonus levels were also taken over. This was partially not the case with the other versions. In return, C64 players needed to lower their sights concerning the game graphics, especially concerning the sprites. The background graphics on the other hand make rather successful impression. Small side elements, e.g. the flame traps or the wheelchair of the upper boss were deleted. In the cassette version the intro was completely taken over. The outro is shortened, the "slushy scene" with Cody and Jessica in the park is missing. Unfortunately, the sound effects were reduced to a minimum of undefinable sounds. The sound programmer, Dave Lowe, who has actually a good reputation, clearly delivered one of his worst pieces here. The worst are the game controls, in comparison to the original the second fire button was deleted, which reduced the choice of fighting techniques significantly. Above all the collision query defies description, two meters off are liberally counted as a hit. Collectable weapon sprites are partially shown with a white background, which is a downright dilletantish graphics bug.
Due to technical reasons it is of course on the C64 not possible to display a bigger amount of enemies at the same time. The arcade original has amongst others a special attraction, because in some situations complete troops of enemies are jumping into the screen. Some enemies even entered the fighting scene coming out of the background graphics, came e.g. through doors, sat on the sits of the metro or at the roadside before they interfered. These scenes were hardly or if, then only poorly, converted for the C64. 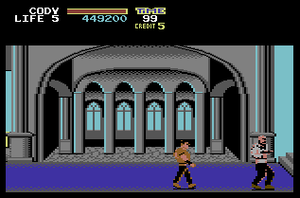 The trio with dangerous fists...

The Mad Gear Gang has a great number of members. Some are trained in handling knives or swords, others are especially tough or strong. The biggest part of the gang are some wimps, that have no speciality. It is also important to have cannon fodder. The members of the gang with more or less fighting power are named Bill Bull, Bred, Dug, El Gado, G. Oriber, Holly Wood, J, Jake, Poison and Roxy, Simons, Two P. and Wong Who. Furthermore there are Axl and Slash, who even appear together here.


The gang's boss and his seven followers have significantly more to go for on the battlefield. At the end of each round you need to take on one of them. 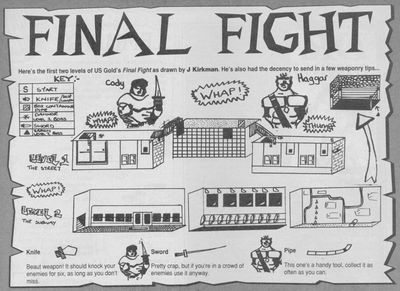 An overview of the first two stages

Well, that went pretty awry for this guy from the Mad Gear Gang... 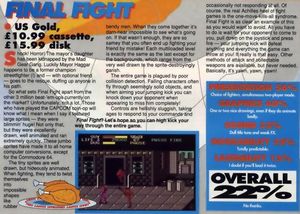 The test report from Zzap!64

Zzap!64 (Presentation 65% Graphics 40% Sound 32% Hookability 35% Lastability 15% Overall 22%): "The entire game is plagued by poor collision detection. Falling characters often fly through seemingly solid objects, and when aiming your jumping kick you can knock down your opponent when appearing to miss him completely!" (unknown author)

Shmendric: "It is really pathetic! Capcom releases first class beat 'em ups and the C64 conversions of them are all first class failures. Again a totally loveless conversion that cannot be compared to a Double Dragon. Playing through it once in the two-player mode can well be accounted for, but to do more of it to yourself is more painful than all blows and hits that Final Fight has to offer. The original of Final Fight was one of my favourite arcade games."

H.T.W: "I do not think that badly about this work. Surely, the background graphics could be finer, the movements of the sprites seem a bit unskillful, the topic of the music takes care of itself, the highscore list is not saved and also there are too little hit variations and special moves available. But you have to partially smirk, because there are also funny scenes, as e.g. the car owner that runs towards his heap of metal while crying, when you have ended the "car smashing bonus round" with "perfect". At least there is also still an intro and an end sequence.

TheRyk: "Laaame! 99% of the game you need one single move to defeat harmless dorks while looking at background gfx that seem pretty nice initially but soon all look pretty much the same. Add poor animation and useless weapons and you've got all a good BeatEm Up does NOT need. Dead boring waste of time, 2 points."

The Femme Fatals of Mad Gear... 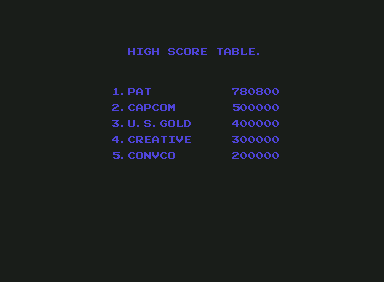