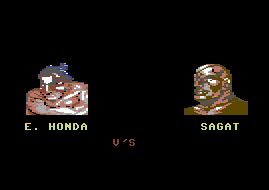 May the games begin...

It's that time again!
After Ryu could win the first Street Fighter tournament, and defeated Sagat, the long-time bearer of the title, a new Street Fight contest is carried out. From the known names of the first tournament, next to Ryu only his rivals Ken and Sagat compete anew. However, the new faces on the battlefield are not to be underestimated, next to a Yokozuna of the Sumo Wrestlers compete a Russian wrestler and a green-skinned creature from the Brazilian jungle. Fire breathing Yoga gurus, a Spanish cage fighter, a former American boxing professional... A challenging diversity was prepared. Also a young woman from China competes in this tournament as well as an American officer. They all have different fighting styles and special abilities, but only one of them can gain the title of World Warrior. And for this the chances are low, because even if you have overcome the laborious path successfully, you still have to face the grandmaster M. Bison.


Aim of the game

If you can defeat your seven opponents, you can compete against the grandmasters Balrog, Vega and Sagat. About the last opponent, M. Bison, not much is known. Word has it, that he is the leader of a criminal organisation named Shadaloo.
When Bison is defeated, you have won the game and can enjoy the honouration at the end. The end title is each individually matched to the character that was played; so e.g. Colonel Guile celebrates the final revenge of his comrade's death, before there is a family reunion which could stem from any cheap bashing/Eastern C-movie with a bad plot. Dudikoff, van Damme and Steven Seagal spring to mind, there is hardly anything more cheap and kitchy. 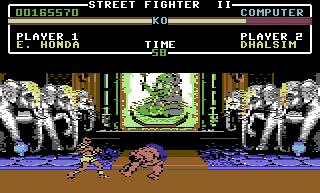 Three elephants on each side, as in the arcade machine. Some other conversions only had two...

Street Fighter II is an exemplar for beat'em up games and was originally one of the most successful arcade machines. A conversion was done for all common systems at that time.
Also on the C64 twelve different opponents have each their own setting for the fights. Eight of them can be chosen by the player. The two-player mode allows a match, the winner needs an adjustable number of KO or time victories. The slight vertical scrolling of the stages and destructible background elements, known from other conversions, was deleted, same as the popular bonus sequences in which you were allowed to smash heaps of stones, burning barrels and a car. Also the successful ending of a game which varies depending on the chosen character, was shortened drastically.
The controls suffer mainly because there is only one fire button instead of six available. Between the single stages and the animated map there are significant loading times. 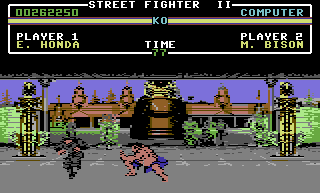 This is valid, assuming that the opponent is to the right of the player.
Each character has several special attacks.
A series of serious hits can lead to a short numbness. 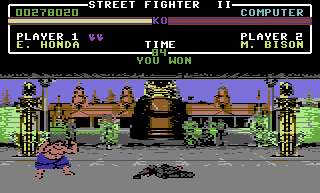 The fighters Ryu and Ken were both trained by the grandmaster Gouken. Therefore their style is the same. 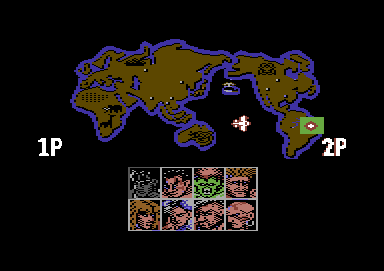 = Fireball of RYU and KEN

= Dragon-Punch of RYU and KEN

There are no cheats known. Some of the cracked versions of the game have trainer options. 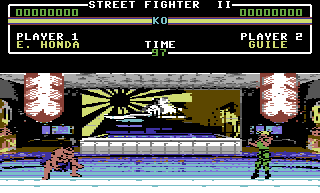 According to the Disk Magazine Game On is this the graphically most successful stage: the bath house...

Magic Disk 64 April 1993: "When looking at Street Fighter II every karateka better binds his belt over his eyes!"

64'er August 1993 (Graphics: 5/10 Sound: 4/10 Vote: 7/10): "...however, Street Fighter II is good concerning the gameplay and will probably enthuse fighting sport fans on the C64. If they had refined the graphics a bit and with some tricks up their sleeves had given the game a bit more of a professional touch, then it would have been a super hit also on the C64. This way is stays a game that will attract nevertheless a lot of fans merely through its tuneful name."

Shmendric: "It is a sheer piece of impudence how boldly they tried here to sell graphical rubbish and nonexistent beat'em up feeling with the help of a prominent name. It is almost an agony to look at the monitor. Not only does the C64 have difficulties with a worthy conversion of such a game, but they also did not make any effort at all, maybe in expectation that something named "Street Fighter II" will sell automatically. Even if you do not compare it with the original arcade or the also very good Super Nintendo or Mega Drive conversion, but with other bashing games on the C64, Street Fighter II unfortunately comes off horribly."
Addition: "Having done the screenshots comfortably in the trainer mode, I have played the game once more honestly, to enter my name in the highscore list. Interestingly, I have not noticed much difference, only during the fight against Dhalsim I felt I had to concentrate for a few seconds, Ryu swept through the game with only the Hurricane Kick. From the estimated 60 fire balls, that were accidentally thrown by the confused pressing of the buttons, only one hit its target - during close combat those things just pass through the opponent without any effect! The most dangerous fighting technique that this game has to offer is clearly the music! I lower my vote to 1, playing this one gave me the rest, I will never ever play this again! P.S.: There are typos in Ryu's end titles... :)"

TheRyk: "Only because a game is more voluminous, it is not necessarily better than its predecessors. The music is mostly harmless, but everything visual is most unsatisfactory. Background gfx are overall so-so, but partially look like cheaply converted from 16bit systems without real effort in terms of post-processing. The sprites do not only look poor but cast serious doubt on the programmers' knowledge of the C64's video chip, it is really hard to understand why the right part of the player sometimes is shifted one or two pixels to the right, even without crossing the x axis overflow. I don't want to talk in greater detail about the flickering, but the terrible animations are worth mentioning. No matter if arms or legs (which are hard to distinguish) leave the body at a move, both looks equally rotten. And once again, it's another far too easy Street Fighter game: Played it through at the very first game, losing just one single fight against Chun Li, not because I was stunned by her beauty, but rather because I was quite shocked how crookedly she sneaks about in this game and had some qualms about beating up miserable old lady with my fists. All in all, Street Fighter II provides zero challenge but extreme loading times to show all the terrible graphics. In a series of flopped Street Fighter ports for the C64, this version hits rock bottom, 2 points."

Starkiller: "A well-known arcade machine, successful conversion for consoles - and a nasty tip-off of the at that time already heavily waning C64 community. If I had seen Street Fighter II in the middle of the 80s for the first time, I probably also would have been totally unsatisfied. But if you already knew other conversion when the C64 version was released, then seeing this version just causes black horror. Here a 16-bit classic was shamelessly defiled - and with it the poor 8-bit hardware that has to run this sorry effort."

A speedrun of pains and bruises: Mingo870 breaks all bones...

Delusive advertisement with screenshots of other systems on the cover of the C64 version was unfortunately common practice, it was vindicated by the lower production costs. Woe to the C64 gamer who lets himself get blinded by the images on the reverse side, the screens have nothing to do with the C64 game, but are marked as "Amiga" and "PC" in very small print. 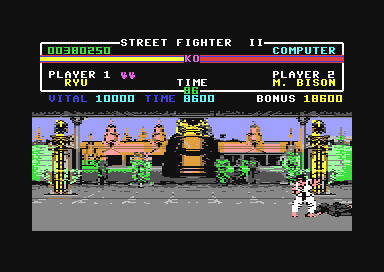