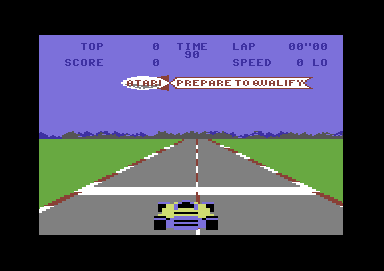 Pole Position is a conversion of the Namco arcade classic, distributed by Atari outside Japan. It is a rather simple Formula One game with the "Fuji Speedway" as the only track. Before the race starts, there is a qualifying lap to determine your starting position, ideally the pole position. After you have qualified, the grand prix starts.

There is a time limit within which you have to complete a lap. So collisions with other cars or advert signs should be avoided, because crashes cost much time. Moreover there are puddles which slow you down if you do not avoid them. If time is up before crossing the finish line, the game is over.

Pole Position is said to be the first realistic racing game with 3D graphics. In fact, the simple car sprites cause the illusion of a 3D perspective. There is also parallax scrolling of a Japanese landscape in the background which also contributes to the 3D effect. All in all, the graphics are rather simple, though it is more realistic than in other racing games of that time such as Pitstop. Before the start an airship with the Atari logo tells the player to get ready. 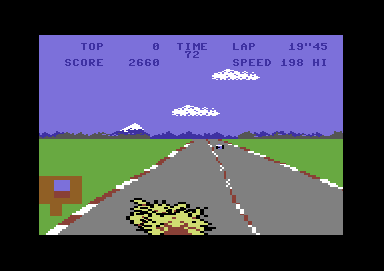 You need to complete the qualifying in less than 58.5 sec to qualify for the pole position in the grand prix.

H.T.W: "One more rather half-baked conversion of a good arcade game. The graphics are a shame if you consider what a C64 can do, (compare Pitstop II which was released in the same year), the sound is rather dull, too. Nevertheless, the game is pretty playable and after an eight lap race you ignore the graphics..."

TheRyk: "As on the Atari systems the C64 conversion has got very bulky graphics. As far as I remember, the game was more challenging on the Atari 800XL resp. 2600, because even if there's little traffic, you cannot just rush through the track with full throttle as on the C64 but have to brake time and again. The collision control is far from exact, there's plenty of time. Inspite of the rather artless design, Pole Position was a good game at its time, though much better racing games should be released shortly after. 6 points." 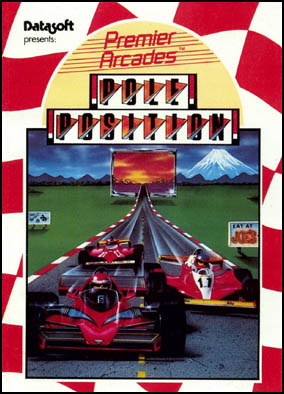 Namco sold several titles to Bally Midway, Atari's rival in businees. Only the dark horse Pole Position was left for Atari. It was quite a surprise that it became the most successful arcade game in the year 1983. It was also the first game with advertisements. 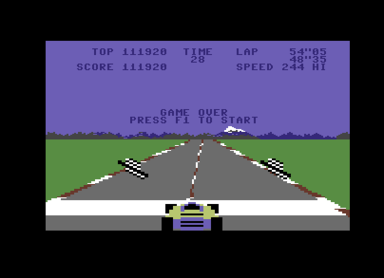