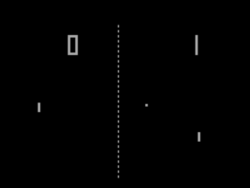 The first mainstream video game, that was a success, was Pong. It is a table tennis simulation for two players, similar to Tennis for Two. Developer of this computer game was the American Ralph H. Baer in 1968, on his Brown Box prototype (later the Magnavox Oddysey.) Nolan Bushnell at Atari used this as inspiration to create the arcade cabinet for Pong. It became immensely popular, and was ported to most platforms since, most notably the Atari 2600. It also found it's way onto most early home computers, such as the Apple II and of course Commodore 64. 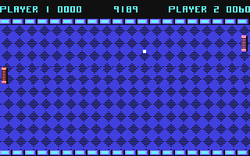 The game Tennis from "Blip! Video Classics" is nearly the original Pong...
In 1972 not so colored like the version of 1988!