In Tapper you take over the role of a barkeeper. At first he has to cope with the storming masses in the Wild West by rolling a glass of beer to every person at the counter. If a guest has finished his beer he goes on and rolls his glass back to the innkeeper. Gradually, the people with a thirst for beer get more. In later levels the game takes place in different surroundings (fair, bar and futuristic tavern). The game is a conversion of the arcade machine from 1983. The machine had a stick shaped as a tap to make the game more real.

Each saloon consists of four counters at whose end there is a barrel of a bigger size, from which the glasses are filled. The levels are displayed each on one screen in pseudo 3D and accompanied by sound and music. Only the most necessary game elements were taken over from the arcade machine. All the gags and gimmicks of the arcade are missing in this version; so e. g. when the barkeeper made a funny intermission after each successful round. The tape versions had a U.S. Gold loader, which played first the US American national hymn and then the "Yankee-Doodle" while loading.

If the barkeeper collects a tip which some guests leave on the counter, two go-go girls will dance and some guests watch the show unhurriedly, giving the player some breathing space since they neither drink nor advance during this period. 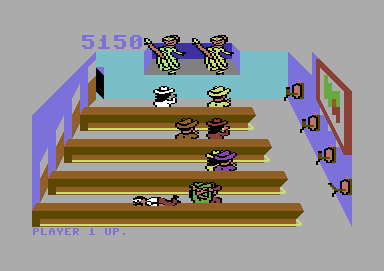 After some levels the barkeeper has to watch which can hasn't been shaken for a bonus.

By pressing the button twice the glasses are filled and then pushed along the counter. The barkeeper can go towards the empty glasses. You control either with the joystick or with the keyboard.

Shift-Lock   = pause (not in the bonus round)

= steer barman to the left along the bar

= steer barman to the right along the bar

= fill mug. The barkeeper cannot be moved while filling, The mug goes to the customer only when it is full.

In the bonus round the screen says at the bottom "Watch Closely". The barman waits on the side of the bar. Now five or six cans are shaken in the bar and then swapped. You have to watch closely the can which was not shaken and then move the barman to this can. Then press the fire button to open this can. If you have chosen the right can you get a bonus of 3.000 points.

Serve from bottom to top. In the higher levels you should serve "intuitively", i.e. send a glass on its way although there is no customer to be seen; because they always appear in the same order and can be served fast with a bit of sure instinct and the right timing.

Rombach: "A funny and difficult skill game, whose charm is still there after a longer time, as the game gets more and more diffcult. If you want to go straight away into the murderous "Rush-hour" you can set this in the menu.This way the professional barkeepres and amateurs can try both at this game. A recommendable game with entertaining plot and almost without violence. "

Jodigi: "I also found that rather entertaining, but I haven’t played it often."

The Doctor: "I used to try to play this game for hours as a kid. I never managed to make it past the first board because I just did get the game's mechanics. That didn't stop me from having a great time - I hadn't learned what frustration was yet." 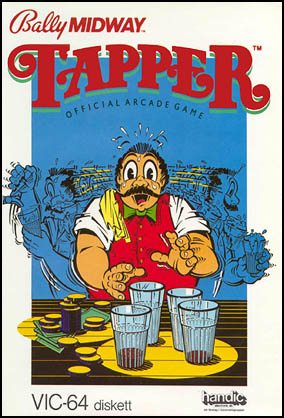 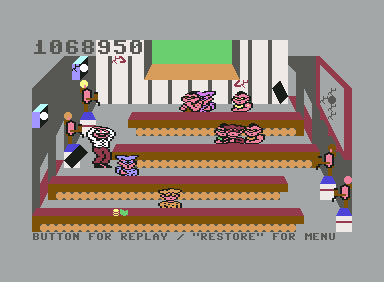