After the evil Zark has deprived Wizworld of all colours, Wizard Wiz and his cat Nifta take off to make their grey world coloured again.

Wizworld consists of several layers between which the wizard and his cat can switch via tubes and craters. In each layer various enemies are lurking, but also the colour drops in demand. Those drops first have to be shot by the wizard before the can be collected by the cat.

Unfortunately, this is not quite as easy as it may appear; Wiz starts his quest alone. At the beginning, he can only bounce up and down with his Wizball in a rather uncoordinated manner. With some upgrades shaped like pearls and activated with joystick wiggling you can enhance his manoeuvrability, get extra weaponry and finally conjure up the cat, who can either be controlled by keeping the fire button pushed down or by a second player via the other joystick port.

When the needed colour drops are collected, a bonus level is launched, providing upgrades, score and even extra lives if you hang on long enough without collision. After the bonus level Wiz mixes the colours in his house, while Nifta refreshes herself. During this sequence the player may chose a permanent upgrade which remains active even after the loss of a life.

The title screen is rather simple, but very colourful due to raster bar effects. The same is true for the actual game, after some colour has been collected.

When you press space in the start screen, you are provided with Wiztips, a short manual.

You can play the game alone, in a team (player two controls the cat) or a multiplayer mode by turns. So in fact it is possible that up to four players participate when two teams play against each other.

When certain aliens are hit, they leave a green pearl behind that stays motionless on the screen. If Wizball collects this, the first icon on the upper rim of the screen starts to flash, which shows that Wiz can choose the extra which this icon displays. If you want to choose another extra you need to collect more green perls until the corresponding icon lights up.
The icons from left to right:

Map of the passages between the levels/layers

1570: "A well-done game with an interesting concept. Pretty nice with two players, but very soon boring when played alone."

Robotron2084: "Absolutely overrated if not even boring to death. The game is just too simple as soon as the extras are collected. The speed is not enhanced. Instead you often search the last alien survivor of a level for minutes, just to pass the very soon annoying bonus sequence again and again. If you get a bonus life and yawn "Not again!", then you know that something is wrong with the game. I had not played it for ten years and won't do it again very soon. Technically, the game is almost perfect, but the almost inexistent action pulls my rating down drastically: 6 of 10 points!"

Shmendric: "I evaluate Wizball similar to Bubble Bobble or Mafia by Igelsoft: a great multiplayer game, that you can take out every now and then to make a small session, but in single player mode? No, thank you, there is really more exciting stuff, it is only good in such games to practice a bit :) I have played Wizball at the end of the 80s for hours and hours with a friend in a team and therefore give 9 points, I would add the tenth if the one player mode would be any good. Concerning graphics, sound and controls - flawless, there is nothing to complain about :)"

Flodder: "Here you can see how especially with games the opinions can differ a lot. For me Wizball is still today pure magic! Alone the glamorous graphics - and above all the sound effects that are hidden in this game, fascinate me until today. There is not more to get out of the C64. You should take some time when you have a quiet moment and look at the complete intro. There are games where such an amount of programming skill is not even found in the whole game. The fun in the game when playing in twos is the absolute hit, but also when played alone Wizball is still good for a small trip to a magial world. The game idea until today stands out pleasantly from the eternal pabulum of pickup-shoot-jump. In fact, the bonus sequence is rather long, if you do not need the extra life you can end it any time by a controlled "suicide" where no life is subtracted. For me an absoulte milestone in the history of computer games, not only of the C64. 10 of 10!"

Ocean presented to Happy Computer an early version with the name "Wizzball" in February 1987. Even then the scrolling and the "water melon" - pawn were impressive ...

A "fan made" title screen, inspired by the cover ... 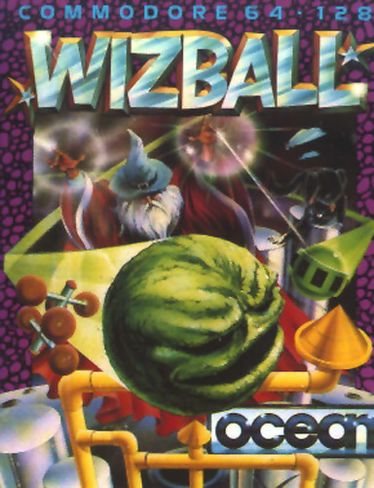 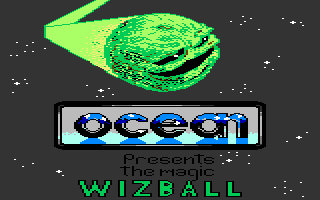 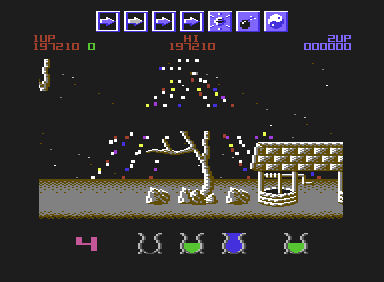