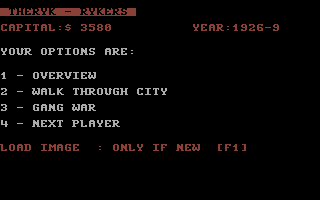 The rather Spartan main menu

During the prohibition crime prospers in Chicago. Every shop owner lives in fear of raids or blackmailing. Bank and mail robberies are more and more common. Everybody can buy fire arms, the corrupt police is no help at all. In this scenario, up to four criminals who have recently been released from prison fight for the domination of Gangland. The way to the Mafia Throne is long and hard. At the beginning, you are a nobody whom not even the shop owners take seriously. You have to do quite a few nasty odd jobs before you can even afford a car or a gun, let alone a flat and your own little gang.

Map of the City

While the game itself mainly consists of PETSCI graphics, created with a modified charset, there are many comic-like multi colour images for the single buildings and events. The sound is not really worth mentioning, besides some FX and jingles there isn't any.

You either have to gain the highest score at the end of the game or win beforehand by achieving the rank "Gangland King" AND robbing a cash transport AND killing the mayor.

For each crime you get a higher hazardousness score which determines your rank. But the more the citizens of Chicago fear and your rivals respect you, the more attention will the police pay to your activities.

With a car you can make more moves per turn.

Combat: After hitting Return  the gangster's color turns black. Now you have to push W/A/S/D  to indicate in which direction (s)he is supposed to strike/stab/fire (depending on the weapon).

Forgeries are not very often detected

Roaming the streets of Chicago is the main part of the game. Every player may walk or drive through the city until he has no steps left and the turn is over. You see a city map from the bird's eye perspective. Your position is represented by a flashing little man. The different car models allow you different amounts of bonus steps. The various actions in the buildings also cost a certain amount of steps each. Sometimes you get trapped in a stop-and-search operation of the police. If they find anything illegal or have a wanted poster of you, they will arrest you, unless you successfully bribe them or run away. Faking Billy (a grey inverse "B" on the map indicates his place) offers you falsified documents for $1000 per gang member. Moreover, you can bribe the commissioner directly at the police department. Both actions can prevent you from being stopped and arrested.

Without a gun you cannot even scare an old lady.

These lousy tenements get more and more expensive

Kill the Mayor (red inverse 'B')

This field is only visible when you have accepted the mission "Kill the Mayor". The mission is a fight against the well-armed bodyguards and afterwards the mayor himself.

This field is only visible after you have accepted the Mission "Rob Cash Transport". The escort will put up one of the hardest fights in the game.

If the barkeeper tells you something about a special deposit in the main street bank, safe-cracking or raiding that bank will be particularly rewarding.

Sometimes the barman offers you to join a gun running by investing $5.000. This can be really profitable, but if the gun runners get caught, your investment is forever gone, at least not you but other people are jailed in that case. 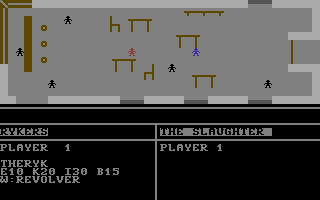 Isn't that just like a wop? Brings a knife to a gun fight! 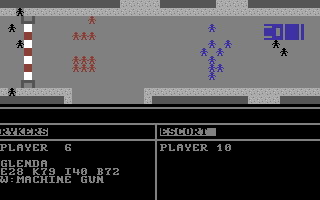 Robbing the cash transport is one of the hardest battles.

The gang war of course only works in a multi-player game. Depending on the wealth of the loser this can earn the winner more than only fame.

The combat against AI enemies or human players is an important part of the game. You see your red colored gang members on the left side, while your blue opponents start in the right half of the screen. In the bottom of the screen you can read the data belonging to the individual characters of both sides.

The two parties take turns. Each character starts with a certain amount of energy which (s)he loses with each hit. If the energy is zero, the character is disabled and out of the fight. The energy will be restored during the next rounds, depending on the power level. Consequently, you should give your gang a break after a difficult fight. Each character can only perform one action per turn, either move or fight. If it's your turn, your first character will start flashing. Be aware that the weapons have a different range. The precision and the effect are of course also important factors. For fighting successfully, you should develop a strategy which includes all of these factors. For example, you could victimize rather useless gangsters as cannon fodder to protect the more important characters.

The fight will last as long as both parties have one man standing. After one party is eliminated you will be shown a survey of the 'losses', but as mentioned even the 'done' gangsters will recover.

The easiest way of winning the game in single player mode is to buy a credit agency, perform some odd jobs (offered in the pub) and then skill yourself at the gun store (training boosts your score for some reason). Buying a car and smuggling alcohol from the pubs at the railroad stations to the other pubs can also help to make some money. As soon as you can (restrictions: intelligence level and small fry rank), make money by safe-cracking. This is relatively safe (haha) and should soon bring you the "hoodlum" rank you need for founding your gang. Train your gangsters until you can equip about half a dozen with a machine gun. Then roam the pubs until you are offered the special missions. Try to place your gangsters in up to three rows when you are in a combat situation. The weaker guys with firearms should be placed leftmost, while strong characters should be in the front line just as superfluous ones, i.e. cannon fodder, useless characters who are supposed to be hit by enemy bullets which otherwise would hurt dearer gang members.

Versions 1.3/1.31+ offer a trainer which equips every player with $99.999 cash and mafioso ranking right at the start.

The German versions also offer a variety of cheats some of which are the result of sloppy coding.

H.T.W: "An absolute classic of which there is even a DOS remake with some modifications called 'Crime Fighter'."

TheRyk: "Definitely a classic and most probably high end if you consider that most of it was coded in BASIC. Of course, it stays a BASIC game even in V 1.31 and it might fail to absorb you completely for weeks. But time and again, Mafia is fun and illustrative material for the possibilities of BASIC. I felt it was time to share this with the non-German-speaking C64 world, but because of lacking longterm fascination I can only rate it very good or 7 of 10."

Ragnarok: "Though the original version was buggy and the balancing could have been done better, Mafia is one of my favorites on the breadbox. Inspite of the crappy graphics, the quasi non-existent sound and the evil booting time, the complete package is well done and conveys a roaring twenties charme. To my knowledge the setting was unique then. A great accomplishment if you consider that it is homemade software."

There are various German versions one of which is austro-speed-compiled. All those versions more or less suffer from various bugs, the earlier ones are even likely to crash. However, V1.20 by H.T.W fixes all of the really serious problems and is the most recent and playable German version, providing many fixes and modifications. That is also the version used for creating the English versions.

On some machines, V1.3+ crashes after a decrunching routine which made the update V1.31+ necessary which is recommended, especially for playing on real hardware. That version should be free of any known bugs and run stable in PAL and NTSC.

Impossible, since the game ends with a maximum score of 100.